Marketing And PR Are Corrupting Universities 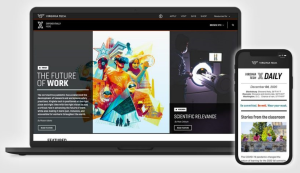 In May, the Advancement Division at my university renamed its morning publication, which had been called the Virginia Tech News, as VTx. X, we are told, stands for EXPONENTIAL. Sorrow and hilarity compete in the hearts of the attentive.

“Exponentially More Videos,” “Exponentially More Features,” etc. — that’s what the banner on top of VTx’s web page advertises as you navigate the site. This is ridiculous on one level because it is simply nonsense: If the office produces 40 “news” stories this week, will it publish 1,600 next week and 2,560,000 the week after that?

The deeper problem, though, is not illogic but tawdriness and lack of character. “Exponential” is a Silicon Valley buzzword often associated with “the singularity,” the idea that technology is changing at an ever-accelerating rate. In the most popular version of this religion, the process will end in computers becoming more intelligent than their human makers. Some say we will upload our consciousnesses onto hard drives in the sky.

The problem is that technology in general isn’t improving exponentially. Just look at the low productivity growth that has marked our economy for decades. A university grasping onto “exponential” wants to smell like Silicon Valley without knowing that Silicon Valley stinks. (And never mind that using “X” in the way VTx does might have been trendy years ago but has long since become unfashionable. When I posted an image of VTx on Twitter, one person responded, “The 1990s called.”)

If “VTx” were an isolated incident, it wouldn’t be worth talking about. But it’s not. It is an example of a much bigger problem: How higher education has become suffused with innovation-speak and business bullshit, using words to chase cash rather than to strive for accuracy and truth. In a real sense, such talk is a betrayal of the mission of universities.