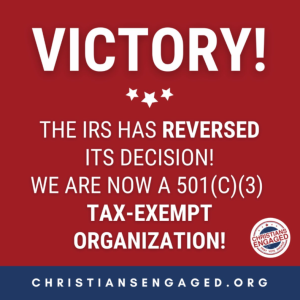 The IRS has reversed course and granted tax exemption to a civic-minded Christian organization that it had proposed denying exemption to for engaging in partisan politics.

Christians Engaged, which encourages Christian involvement in civic affairs, has received exemption as an organization described under section 501(c)(3), according to a July 7 release from the First Liberty Institute, which represented Christians Engaged when the group appealed the proposed denial.

Today, First Liberty Institute announced that the IRS has granted tax exempt status to Christians Engaged, a nonprofit organization that educates and empowers Christians to pray for our nation and elected officials, vote, and be civically engaged.  The reversal comes after a national backlash against the IRS’s initial rejection of Christians Engaged’s nonprofit status because, the IRS claimed, “[B]ible teachings are typically affiliated with the [Republican] party and candidates.” ...

Christians Engaged provides nonpartisan religious and civic education, focusing on encouraging and educating Christians to be civically engaged as a part of their religious practice. Christians Engaged applied for tax exempt status in late 2019.  On May 18, 2021, IRS Exempt Organizations Director Stephen A. Martin denied the application, contending that Christians Engaged “engage[s] in prohibited political campaign intervention” and “operate[s] for a substantial non-exempt private purpose and for the private interests of the [Republican] party.” After the appeal, Director Martin granted the application for 501(c)(3) status.