Hartung Reviews Levit & Rostron's Beyond One L: Stories About Finding Meaning And Making A Difference In Law 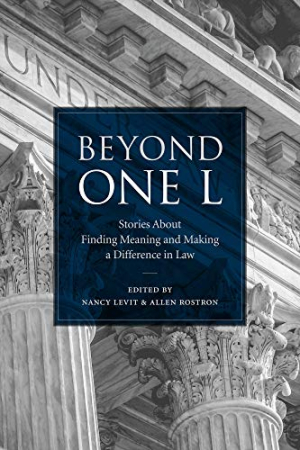 Scott Turow’s One L, the widely read account of his first year at Harvard Law School in 1975, is said to have “frightened, informed, and inspired a generation of lawyers-to-be”. Beyond One L: Stories About Finding Meaning and Making a Difference in Law, published nearly 45 years later, is billed as a “collection of stories taking a further look at the often dramatic and sometimes traumatic experience of embarking on the study of law”. While One L ostensibly described “universal truths” (xi) about law school in the 1970s, Beyond One L illustrates how dramatically the law school experience has changed since Turow arrived at Harvard as part of a first-year class that was overwhelmingly “male, white, and straight”. At the same time, Beyond One L’s collection of essays, which includes entries from several well-known figures in legal education, reminds us how many aspects of legal education remain the same.

In the face of difficult and polarizing times, when lawyering and the rule of law are frequently perceived as under attack, Beyond One L offers “an antidote to disillusionment with the legal profession” through storytelling.

Contributors to this wide-ranging collection tell stories that deviate dramatically from Turow’s original perspective. The book, importantly, succeeds in elevating the perspective of attorneys who, unlike Turow, experienced law school through the lens of historically marginalized people and communities. The collection of essays is divided into eight parts, which are loosely organized chronologically around the decision to go to law school, the law school experience and the bar exam, post-law-school career paths and, finally, finding meaning and fulfillment in the practice of law. Collectively, these essays provide an array of perspectives that will likely appeal broadly to prospective law students and practicing lawyers alike.