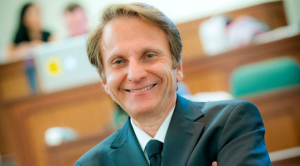 The Chapman Family suffered a tremendous loss on July 14 when Fowler School of Law Professor Frank Doti was tragically killed in a car accident while travelling with his family. A member of the law school faculty since 1996, Doti founded both the Fowler School of Law’s Tax Law emphasis program and its Tax Law Clinic, and taught such courses as Contracts I and II, Federal Income Taxation, and Estate and Gift Tax Law.

“One cannot speak about the Fowler School of Law and its rich history without inevitably talking about Frank Doti,” said Fowler School of Law Dean Matt Parlow. “He was as well-known in the world of tax as he was well-loved by his students, and we will miss our beloved friend and colleague.”

Proving his popularity among students, Doti received the M. Katherine Baird Darmer Outstanding Professor of the Year Award in 2012, and one of his former students, Chapman University Trustee Zeinab Dabbah, M.D. (JD ’12), made a generous gift to name Kennedy Hall’s room 142 the Frank Doti Lecture Hall in his honor.

“Even during the pandemic, Professor Doti enjoyed staying engaged with students outside of class, participating in online events with them,” Dean Parlow said.

Renowned in his field, Doti served as an editor of the American Bar Association’s tax law journal, The Tax Lawyer, published a number of law review articles, and authored the coursebook Contract Law Flowcharts and Cases: A Student’s Visual Guide to Understanding Contracts. In recognition of these and other accomplishments, Doti held the William P. Foley II Chair in Corporate Law and Taxation.

Prior to joining Chapman, Doti taught at Western State College of Law for 14 years. Before joining the legal academy, he enjoyed a very successful legal career, practicing law at McDermott Will & Emery in Chicago and serving as Vice President and Tax Law Counsel at the Leo Burnett Advertising Agency, also in Chicago.

A memorial service will be held in the fall to celebrate Doti’s life and the impact he has had at Chapman, with details to be announced soon. In the meantime, we invite those who have memories, stories, and photos to share of Professor Doti to submit them via an online form.