Andrés Báez (Universidad Carlos III de Madrid) presents Because Not Always B Comes After A: Critical Reflections on the new Article 12B of the UN Model Tax Convention on Automated Digital Services virtually today as part of the Indiana/Leeds Summer Zoom Tax Workshop Series hosted by Leandra Lederman (Indiana) and Leopoldo Parada (Leeds): 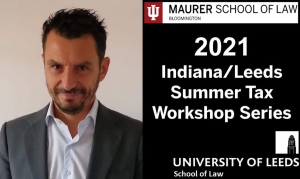 Proposals to try to meet the challenges of the digital economy through a more or less extensive system of withholding taxes at source are a not great novelty. However, in recent times, these proposals have gained new academic impetus in parallel with the work that, since 2013, and in line with the BEPS Plan, the Organisation for Economic Cooperation and Development (OECD) has been developing concerning taxation of the digitalized economy.

However, these proposals do not seem to have found their way into policymakers' work in international taxation, at least as far as the Organization for Economic Cooperation and Development (OECD) is concerned. Indeed, although the first report issued by the OECD under Action 1 of the BEPS Plan on the taxation of the digital economy showed a withholding tax on digital transactions as a possible option to tackle the broader direct tax challenges of the digital economy - together with the so-called new nexus based on the concept of significant economic presence and the equalization levies - the Interim Report, approved less than three years later, poured cold water on the hopes of those who saw withholding taxes as a feasible and straightforward alternative to face the colossal difficulties of taxing the digitalized economy.