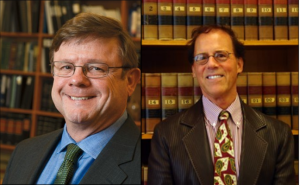 Please join the United States Tax Court for the next in its series of monthly programs celebrating diversity and inclusion in tax law.

Judge Joseph H. Gale holds an A.B. in Philosophy from Princeton University and a J.D from the University of Virginia School of Law. He practiced law as an Associate Attorney with Dewey Ballantine and with Dickstein, Shapiro and Morin before working on Capitol Hill. He served as Tax Legislative Counsel for Senator Daniel Patrick Moynihan, and in several positions, including Chief Tax Counsel and minority Staff Director and Chief Counsel for the Senate Finance Committee, before being appointed to the Tax Court for his initial term by President Clinton. Judge Gale was reappointed by President Obama for a term ending in 2026.

Judge Albert G. Lauber received a B.A., summa cum laude, from Yale College, an M.A. in Classics from Clare College, Cambridge University, and a J.D. from Yale Law School. Judge Lauber served as a Law Clerk to Judge Malcolm R. Wilkey of the U.S. Court of Appeals for the D.C. Circuit, and as a Law Clerk to Justice Harry A. Blackmun of the U.S. Supreme Court. Before being appointed to the Tax Court by President Obama, Judge Lauber also worked for the Department of Justice (as Tax Assistant to the Solicitor General and as Deputy Solicitor General), was a Partner with Caplin & Drysdale, Chartered, and was the Director of the Graduate Tax & Securities Programs at Georgetown University Law Center.