This isn't a full post-mortem on the 2020-2021 application cycle, because it's not over yet. But we're at the point when we can start to get a feeling for what happened this year. Obviously the main story is the increase in applicants and applications, and the results of that increase.

More than any year in recent history, this cycle has seen a huge increase in applicants. As of June 4, 2021, there are 17.6% more applicants than there were on that same date last year, which comes out to an additional 10,205 applicants.

That increase is notable on its own, but what has made this cycle even more chaotic is the tremendous and disproportionate increase in applicants in higher-scoring LSAT ranges. ... 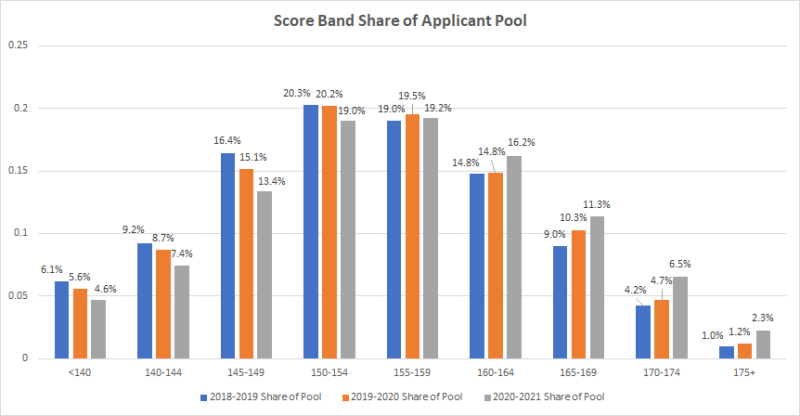 The decline in the lowest scoring bands is also notable. LSAC will probably attribute that to the availability of free prep materials on Khan Academy. That's certainly a plausible explanation. Another factor to consider is the availability of LSAT Score Preview, which allows test takers to see their score and cancel it if they don't like it. Low scoring test takers are probably likeliest to cancel.

There were also just more people taking the LSAT overall this cycle. ...

The outcome of the applicant increase, score bubble, and generally confused relaying of information led to one of the most stressful application cycles we can remember, for both applicants and law schools. Applicants were being shut out of schools they'd considered safe targets. Law schools weren't sure if they were going to be able to fill their classes, because they'd aggressively targeted improved medians — or were worried they would over-enroll because they hadn't been aggressive. ...

This all led to a deposit season unlike any other. We all remember the Notre Dame deposit fiasco [Notre Dame Law School Dean Defends Exploding Deposit Deadline For Incoming 1Ls]. Notre Dame was the canary in the coal mine — it seems that yield was higher across the board. A number of schools have reported that they are significantly above their target deposit numbers. Some law schools are actively soliciting deferrals from their admitted students. According to a survey done by LSAC, 55% of the 141 responding ABA schools indicated they had exceeded or would exceed their deposit targets. 23% of those providing data indicated that they had exceeded or would exceed the target by at least 20%. Only 2 schools reported they were or would be below the target.

Probably not coincidentally, 55% of the respondents reported they anticipated larger Fall 2021 entering class sizes for their schools.

The winners of this application cycle will probably be schools that bet big on substantial improvements to their incoming class profile. Anecdotally, most schools seem to have gone for a +1 LSAT median, but many have also targeted +2, and we know of schools that are sitting at a +3 (as of now; this could change) with improvement to GPA too. It's not common, but it seems to be happening. One other positive is that we're hearing pretty widespread reports of increased diversity in the incoming Fall 2021 classes.

On the other hand, there are schools that won't see their numbers improve as much. These will probably be schools that made a lot of early decisions, or were cautious about targeting larger class profile improvements. They could lose ground relative to some of their peers. Those schools may also have accepted students who would, due to the competitive nature of the cycle, yield at higher rates and cause some of the over-depositing we're seeing. That's not to say those schools won't or shouldn't be happy with their results, but they may regret not quite achieving as much as they could have. Especially next March, when the U.S. News rankings come out.

This really was the hardest, most chaotic admission cycle we've seen in a long, long time. Ever really.

A surge in law school applicants has led to confusion and dashed hopes for many aspiring attorneys, says admissions consultant Mike Spivey.

Update #2:  ABA Journal, Law School Overenrollment: A 172 LSAT Score May Not Be What It Used To Be, According To Some:

For last year’s admissions cycle, a candidate with a 172 LSAT score and a 3.8 undergraduate grade-point average would have likely been accepted to the top eight law schools, says Mike Spivey, a law school admissions consultant for applicants.

“That very well may not happen this year because we are so oversaturated,” says Spivey, who questions whether LSAT-Flex scores were scaled properly. According to him, there are enough people with LSAT scores above 160 in this cycle to fill first-year classes at the top 111 law schools.