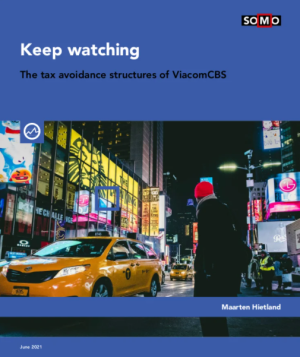 A new report details ViacomCBS’s use of a labyrinthine tax shelter to sell rights to its shows and films overseas.

Dismissed by critics and devoured by fans, “Transformers: Age of Extinction” was the top box office film in 2014, bringing in $1.1 billion, with more than three-quarters of those dollars coming from overseas.

ViacomCBS’s Paramount Pictures, which distributed the computer-animated action-fest, saved much of that money by licensing the international rights through a complex strategy designed to avoid paying U.S. taxes, according to a study published on Tuesday by the Centre for Research on Multinational Corporations, a nonprofit group funded in part by the Dutch Ministry of Foreign Affairs [Keep watching: The Tax Avoidance Structures of ViacomCBS].

It is common practice for multinational corporations to take advantage of tax shelters. The report offers a rare look at how one company has pulled it off.

ViacomCBS, a media giant that came into being after the 2019 merger of the sibling companies, has used the same strategy for all its entertainment properties, according to the report.

Since 2002, ViacomCBS and its predecessor companies, Viacom and CBS, together avoided paying $3.96 billion in U.S. corporate income tax through a system that involved subsidiaries in Barbados, the Bahamas, Luxembourg, the Netherlands and Britain, according to the report.

Much of the $30 billion in non-U.S. royalty revenue brought in by the company’s film and TV franchises, such as “SpongeBob,” “Star Trek” and “Mission: Impossible,” has not been subject to corporate taxes, the study determined.

ViacomCBS disputed the findings, saying in a statement that the study was “deeply flawed and misleading” and that it “demonstrates a fundamental misunderstanding of U.S. tax law.”

“It is filled with mischaracterizations, material omissions and numerous false claims,” the company said in a statement. “ViacomCBS fulfills its tax obligations in all 180-plus countries and the territories we operate, and all of our revenues — including those identified in this report — are fully taxed in relevant jurisdictions around the world, including the United States, as required by applicable law.”

ViacomCBS added that its “overall global effective tax rate” was 32.6 percent for Viacom between 2006 and 2019 and 33.8 percent for CBS in that time span.

The study on ViacomCBS’s tax structure has come out weeks after President Biden proposed a 15 percent minimum tax on overseas profits for U.S. companies, an effort designed to keep countries from competing with one another by lowering their tax rates. The is part of a larger plan to overhaul the tax code that would raise corporate income tax in the United States to 28 percent, from 21 percent.

ViacomCBS, which is led by Shari Redstone, has sought to take advantage of ever-changing tax laws in other countries in a “cat and mouse” game, the study said. Before the merger, Viacom and CBS, both controlled by the Redstone family, employed the same strategy of moving foreign intellectual property licensing rights to subsidiaries outside the United States when rates became more favorable, the report said.

The Centre for Research on Multinational Corporations said it had focused on ViacomCBS because the company had set up a number of Dutch subsidiaries, known as letterbox companies, to take in large amounts of television revenue.

“Most of the entities did not even have a single employee,” Maarten Hietland, one of the study’s authors, said in an interview.

More on the study that says the media giant used international tax networks to cut its bill.