The Managing Director’s Office of the American Bar Association Section of Legal Education and Admissions to the Bar released today a new set of bar passage data outcomes for ABA-approved law schools that provides national “ultimate” and first-time pass rates based on race, ethnicity and gender. ...

Under 2019 revisions to the bar passage rule known as Standard 316, ABA-approved law schools must have 75% of their graduates who take the bar examination pass within two years of graduation or face the potential of being found out of compliance. The section maintains both percentage pass rates for first-time takers and the two-year aggregate figure, known as the “ultimate” pass rate.

“During discussions about the amendments to Standard 316, commenters expressed concern about the lack of national data on bar passage by members of different racial and ethnic groups,” said Bill Adams, ABA managing director of accreditation and legal education. “We promised to collect and publish such aggregate data and consider whether the requirements of the standard needed to be reconsidered in light of what we collected. This report is consistent with that promise and will be further evaluated in the months to come.” 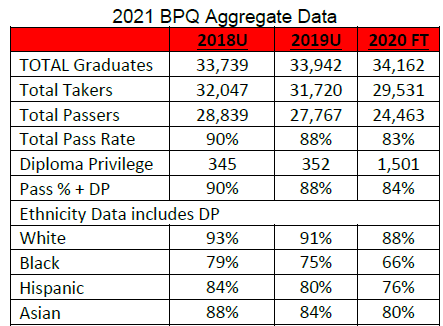