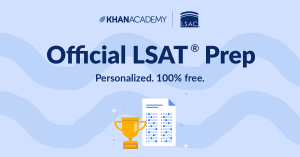 Free online Law School Admission Test (LSAT) preparation resources from the Law School Admission Council and Khan Academy have been widely utilized by LSAT and LSAT-Flex test takers. In September 2020, nearly 70,000 individuals engaged with Khan Academy’s Official LSAT® Prep platform. The purpose of this study was to examine the potential effects of engagement on actual LSAT performance. Our analyses showed that a higher level of engagement (measured in terms of practice time and number of practice exams taken) was associated with higher performance on the LSAT. These results held not only for the overall population but also across multiple demographic subgroups. The results also showed that the performance of test takers with lower initial practice exam scores was associated with slightly higher LSAT score gains per practice minute, indicating that these students benefitted at least as much as students who scored higher initially.

Because this was a quasi-experimental controlled study, the possibility of alternative influences on LSAT performance cannot be ruled out. However, we believe that engagement with the Khan Academy platform is currently the best explanation for the LSAT score increases observed in this study.