IRS Denies Tax-Exempt Status To Organization That Encourages Christians To 'Pray, Vote, Engage' Because '[B]ible Teachings Are Typically Affiliated With The [Republican] Party' 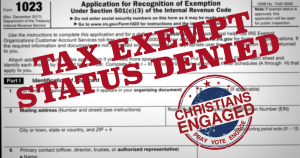 Christian legal organization First Liberty Institute is appealing the recent denial by the IRS to grant tax exemption status to a Texas Christian group that the federal agency alleges supports the Republican Party.

In May the IRS denied 501(c)(3) status to the Texas-based prayer group Christians Engaged because it encourages its members to vote for state and national leaders. The federal agency specifically noted in its rejection that the group supports Republican candidates.

In its letter, IRS Director of Exempt Organizations Stephen A. Martin concluded the group does not qualify as an organization described in IRS Section 501(c)(3) because it is not operated exclusively for religious and educational purposes. Specifically Martin noted, "You are engaged in prohibited political campaign invention" and "You are also not operated exclusively for one or more exempt purposes...because you operate for a substantial non-exempt private purpose and for the private interest of the 'D party.'" The "D party" is a reference to the Republican Party, according to a "legend" provided at the top of Martin's letter to the religious group.

Today, First Liberty Institute appealed an IRS determination denying tax exempt status to Christians Engaged, a nonprofit organization that exists to educate and empower Christians to pray for our nation and elected officials, vote, and be civically engaged. In a letter issued in May, the IRS argued that Christians Engaged was not eligible for 501(c)(3) status in part because “[B]ible teachings are typically affiliated with the [Republican] party and candidates.” ...

“The IRS states in an official letter that Biblical values are exclusively Republican.  That might be news to President Biden, who is often described as basing his political ideology on his religious beliefs,” said Lea Patterson, Counsel for First Liberty Institute. “Only a politicized IRS could see Americans who pray for their nation, vote in every election, and work to engage others in the political process as a threat. The IRS violated its own regulations in denying tax exempt status because Christians Engaged teaches biblical values.”

Christians Engaged President Bunni Pounds said, “We just want to encourage more people to vote and participate in the political process.  How can anyone be against that?”