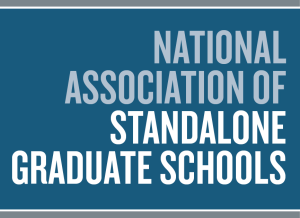 Law schools have faced no shortage of challenges during the COVID-19 pandemic, but independent law campuses—those not attached to larger universities—have dealt with an additional hurdle: it has been more difficult for them to secure government relief funds.

That funding struggle lead to the formation of the first-ever coalition of independent graduate schools, unveiled this week. The National Association of Standalone Graduate Schools aims to improve federal funding for institutions that are not attached to undergraduate programs, streamline regulations at the state level, and serve as a hub of strategy and shared innovation across institutions.

The association was spearheaded by New York Law School Dean Anthony Crowell and counts eight law schools among the inaugural 11 members. The other law school members are the University of California Hastings College of the Law, Brooklyn Law School, South Texas College of Law Houston, California Western School of Law, Appalachian School of Law, New England Law Boston and Vermont Law School. The three non-law school members are the Bank Street Graduate School of Education, Relay Graduate School of Education and the Erikson Institute, a Chicago graduate program that focuses on early childhood education. Organizers said they expect the roster of member institutions to expand in the coming months. ...

The number of standalone law schools has been declining. Eight independent law schools have either merged or closed up since 1995, leaving 16 such campuses accredited by the American Bar Association. Most recently, Arizona Summit Law School shuttered and The John Marshall Law School in 2019 became part of the University of Illinois at Chicago. The standalone Thomas Jefferson School of Law recently opted to forego American Bar Association accreditation and instead become accredited by the State Bar of California.

The pandemic has forged closer ties between the 16 independent ABA law schools that remain.