I was inspired by this item in yesterday's Chronicle of Higher Education Daily briefing: 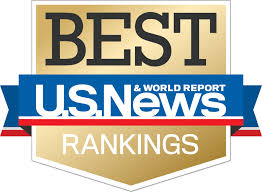 In the status-conscious world of higher ed, rankings — however methodologically flawed — exercise a profound and dubious influence on campus and off. Who’s in, and who’s out? Who’s up, and who’s down? So it was not surprising recently to see a question on Quora about where Emory University stands in the academic pecking order. Is it “on the same level as UChicago, UPenn, Cornell, Columbia, and Northeastern, or is it on the same level as UC Berkeley, UCLA, Michigan, CMU, and USC?”

Several dreary replies indulged the questioner’s horse-race view of higher ed. Then Jeff Erickson, a computer-science professor at the University of Illinois at Urbana-Champaign, weighed in. Emory, he wrote, topped Chicago but was below Cornell — in terms of their elevation above mean sea level. He then provided a topographical ranking of all those universities, led by Carnegie Mellon, at 971 feet. At the bottom was Northeastern, at just 13 feet. Erickson’s refreshing view of what really counts in academic stature prompted us to apply it more widely. For example, under his vision, the University of Colorado at Boulder, at over a mile high, might well be the acme of American higher ed, towering over that puny college in Cambridge, Mass., a mere 10 feet above sea level.

Here are the U.S. News Top 50 law schools, re-sorted by their elevation above sea level: