Following up on my previous posts (links below): 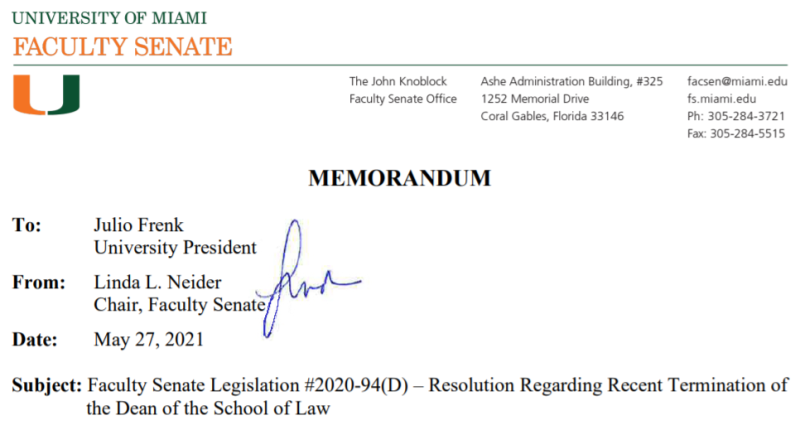 The Faculty Senate, at an Executive Session on May 27, 2021, unanimously approved adopting the following resolution.

The Faculty Senate, as elected representatives of the University of Miami faculty, disapproves President Frenk’s unilateral decision to terminate Anthony Varona as Dean of the School of Law, effective July 1, 2021, only two years into a five-year term. We support our School of Law colleagues, students, and alumni who are understandably shocked by this decision particularly in view of Dean Varona’s commitment to the success of the school, his effective efforts to maintain the financial health of the school during the past two pandemic years, and his leadership vision for the school going forward. The firing of Dean Varona without appropriate faculty input and consultation has severely tarnished the university’s local, national, and international reputation. Moreover, this decision threatens to negatively impact hiring, recruitment, and accreditation going forward.

As a body of elected faculty leaders, we pride ourselves on working collaboratively with the administration, especially during the past fifteen months of the pandemic. It is disappointing that this spirit of collaboration and shared governance was clearly violated in making such a precipitous unilateral decision with no input from the faculty of the School of Law. We lend our complete support to the unanimous resolution adopted by the School of Law faculty on May 25, 2021, and strongly condemn the President’s decision to remove Dean Varona from his role. Furthermore, we strongly urge the President to reinstate Dean Varona and to evaluate him according to the processes specified in the Faculty Manual.

This legislation is now forwarded to you for your information.

In a unanimous decision, the University of Miami Faculty Senate is calling on President Julio Frenk to reinstate Dean of UM Law Anthony Varona, who was fired on May 25. ...

Varona, who had completed two years of his five-year term, was first asked to resign on Monday by Frenk and Duerk. He declined, which prompted his termination, according to a faculty member close to the situation.

After the firing was made public, Varona released a statement calling the termination “baseless.” Varona has hired prominent civil rights and employment lawyer Debra Katz to represent him in all legal proceedings related to his employment at UM.

On May 27, Katz emailed Frenk a letter calling Varona’s firing unlawful. “I am writing now to demand that you retract the defamatory statement you made regarding Dean Varona’s alleged lack of leadership as the reason for his wrongful termination,” Katz wrote. ...

The move by Frenk to fire Varona, and the manner in which he did it, is unprecedented in recent memory, some faculty members say. “I have never heard of a firing 22 months into a deanship with no explanation,” said Stephen Halpert, a law professor at UM. “Inside and outside the academic world the president looks inept.” ...

Varona specializes in gender and sexuality law and was general counsel and legal director of the Human Rights Campaign, the nation’s largest LGBTQ civil rights organization, before he entered full-time teaching.

Many in the law school community say there must be other unstated reasons behind Varona’s abrupt and unceremonious dismissal.

UM law school alumna Elizabeth Schwartz echoes several who speculate that UM administration, though willing to appoint an openly gay dean, may no longer be comfortable with that decision. “It smacks of discrimination,” said Schwartz, an LGBTQ activist. “It’s disgusting.”

When Varona was appointed, she and other LGBTQ members had “never felt more proud” of UM law, she said. Now she said she is changing her estate and removing donations she had planned for the law school. She says multiple clients have called her looking to do the same.