With deficits at levels not seen since World War II, the March $1.9 trillion stimulus only beginning to spend out, and President Biden calling for significantly higher marginal tax rates to help fund another $4 trillion of spending, maybe it’s time for a reality check on how high marginal tax rates, and the actual tax rates paid by Americans, can be raised without crushing economic growth. Proponents of massive tax increases will argue that economic growth and prosperity are compatible with high tax rates by pointing to the 35 years of postwar prosperity in America, when the top federal tax rate was 70% or higher.

But before accepting this as proof by example, it’s worth examining how many taxpayers actually paid those top rates and what percentage of their income high earners actually paid in taxes. Economists Gerald Auten of the Treasury Department and David Splinter of the Joint Committee on Taxation have compiled an extraordinary new database using Internal Revenue Service data on taxes actually collected since 1962. The top marginal income-tax rates and the taxes actually paid, including payroll taxes, as a percentage of income for the top 1%, top 10% and bottom 50% of income earners are shown in the nearby chart. 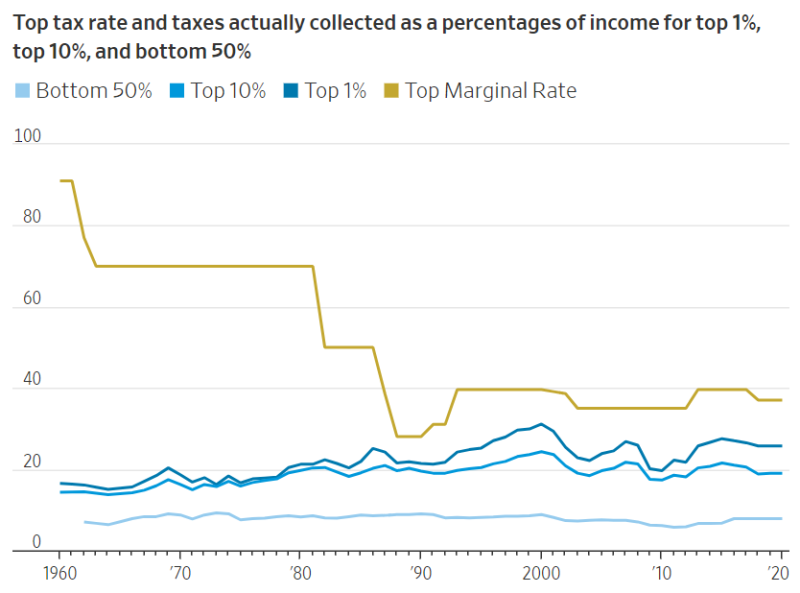 The percentage of income actually paid by the top 1% of earners, which the Tax Policy Center estimates to be 25.7% in 2020, is close to the average rate paid during the last quarter-century. Whether the federal government could actually impose a top rate of 50% on a significant number of taxpayers, or actually collect much more than 30% of the income of the top 1% of earners in income and payroll taxes, without crippling economic growth is a question our postwar experience certainly doesn’t answer. ...

Before Congress bets the future of America on the federal government’s ability to soak the rich without crippling the economy, lawmakers need to recognize that the marginal rates being proposed have never been collected from any significant number of taxpayers except under the direst circumstances such as a war for survival. Voters might also note that in the rest of the developed world, where government takes a larger share of GDP in taxes, high earners pay about the same share of GDP in income taxes that high-income Americans pay today, but everybody else pays a lot more.