Following up on my previous posts (links below):  Society of American Law Teachers, SALT Calls for Review of Dismissal of University of Miami Law Dean Anthony Varona (May 28, 2021): 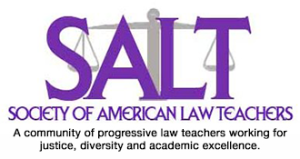 SALT expresses grave concerns over the abrupt decision by University of Miami president Julio Frenck to terminate Anthony Varona as Dean, effective July 1, 2021, less than two years into his five-year contract and a mere two weeks after a positive annual review accompanied by a merit raise.

Dean Varona has been a leader among legal educators for many years. Prior to serving as the University of Miami Law School’s dean, Dean Varona served for 14 years as Vice-Dean and Associate Dean for Faculty and Academic Affairs at American University’s Washington College of Law. He is a well-regarded legal scholar and teacher, and has played a critical role in the organization of the periodic National People of Color Legal Scholarship Conferences. As UM’s Dean, Dean Varona has been widely praised for his leadership and stewardship of the UM Law School in the midst of a pandemic. His leadership among the Florida law school deans contributed immensely to ensuring that Florida bar-takers were provided fair and equitable testing conditions during the pandemic.

When a dean has engaged in malfeasance, a university may have to act unilaterally and without notice. That is not, however, the case here. There have been no allegations of malfeasance by Dean Varona. President Frenck’s public statement set forth a concern about whether Dean Varona had the “required vision and effectiveness of execution” needed for successful completion of UM’s capital campaign. Dean Varona’s success in fundraising during his first two years as UM’s Dean belies that explanation.

The lack of consultation in this process violated well-established best practices for facilitating productive collaboration and mutual respect. Transparency and open communication are essential components of productive collaboration. Productive collaboration is facilitated when all segments of the law school community—including administration, faculty, staff, and students—are consulted. Good governance creates better outcomes and fosters a culture in which all stakeholders feel ownership and visibility in the institution.

An overwhelming majority of the tenured faculty at UM Law School adopted a resolution raising concern about the decision, expressing confidence in Anthony Varona’s work as dean, and seeking dialog. They note, “He has led us through a pandemic with our community intact, kept us on sound financial footing, and been responsive to rankings and bar pass challenges.” SALT calls on the UM President, Provost, and Executive Committee of the Board of Trustees to meet with the faculty in the spirit of open communication and collaboration.

Dean Varona was UM’s first Latinx and openly gay dean. The appearance of an arbitrary dismissal raises particular concerns that the dismissal may have been motivated by bias. In this situation, it becomes important to clarify the motivation for his dismissal. To that end, SALT urges a review of the decision.

This decision would only be justified in an instance of serious malfeasance, which has not been alleged here. UM’s leadership should recall the decision and begin anew. While this incident has harmed UM’s reputation, there is still time to repair this damage. SALT urges UM’s leadership to act now.

On May 28 the Society of American Law Teachers also released a statement calling for a review of the firing.

“SALT expresses grave concerns over the abrupt decision by University of Miami president Julio Frenk to terminate Anthony Varona as Dean,” the letter opens. “Dean Varona was UM’s first Latinx and openly gay dean. The appearance of an arbitrary dismissal raises particular concerns that the dismissal may have been motivated by bias. In this situation, it becomes important to clarify the motivation for his dismissal. To that end, SALT urges a review of the decision.”