John Eastman To Sue University Of Colorado For $1.9 Million For Stripping Him Of Duties After Jan. 6 Capitol Speech

Following up on my previous posts (links below):  Colorado Politics, John Eastman Seeks to Sue CU For $1.9M For Stripping Him of Duties After Capitol Rally Speech: 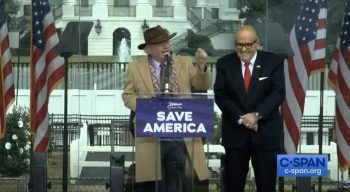 John Eastman, a University of Colorado Boulder visiting professor, is looking to sue CU for nearly $1.9 million after he was stripped of most of his job duties following his speech at President Donald Trump’s Washington, D.C., rally on Jan. 6 prior to the Capitol insurrection.

Eastman filed a legal claim Thursday alleging breach of contract and defamation, saying CU Boulder and its leaders have “discriminated against Dr. Eastman on the basis of his political affiliation and political philosophy,” in violation of the university's anti-discrimination policies.

The claim said Eastman will seek $1.85 million for 10 years of future salary he claims he can’t earn due to "reputational harm" and $19,835 leftover in his CU research account. The legal claim is a statutory prerequisite before Eastman can file a lawsuit.

The campus's decisions regarding Professor Eastman were made in accordance with its university policies concerning freedom of expression and academic freedom. Consistent with First Amendment principles and the university’s policies, Professor Eastman is able to speak on any subject he wishes and pursue his scholarship. The university has taken no action that would deter a reasonable person from engaging in free speech, and Professor Eastman continues to express his views in writing. ...  The university, however, is not constitutionally obligated to have him serve in a representational capacity when he exercises his right to free speech.  Professor Eastman was not suspended.  The College of Arts & Sciences canceled his spring courses for low enrollment in accordance with its policies. Provost Moore appropriately relieved him from performing outreach functions on behalf of the Benson Center, because his continued performance of those duties would likely cause disruption and harm to the center.