Henderson: The Best Metaphor For Today’s Legal Market Is the Auto Industry Circa 1905

Bill Henderson (Indiana), The Best Metaphor For Today’s Legal Market Is the Auto Industry Circa 1905: A Crowded, Chaotic Landscape in Love With the Future:

[T]the auto industry is a very powerful metaphor to understand the evolution of the legal market, particularly the energy and dynamism of the one-to-many legal ecosystem. ... Yet, on several dimensions, the auto industry is an imperfect metaphor.  Thus, to avoid being led astray, it is worth understanding the metaphor’s boundaries and limitations.  Relatedly, and no less important, many lawyers have a viscerally negative reaction to any suggestion that legal work, or even facets of legal work, can be mechanized or industrialized.  Therefore, in my talks to lawyers—particularly early or late majority audiences, which is most law firms—I tend to steer clear of auto industry comparisons.  Yet, in all candor, I believe this analysis is powerful and important.  ...

This story makes more sense when we start in the middle (present) and then look backward.  This is because our frame of reference on cars is anchored in events that are familiar to most consumers and observers of business.

Section A is about the recent history–the challenges and pathologies of a mature US auto industry and how it was eventually transformed by lean production methods pioneered by Japanese carmakers, with the vast majority of the spoils flowing to consumers.  In some respects, BigLaw’s lucrative one-to-one consultative services model is akin to the privileged market position of the Big Three during the 1960s and ’70s. In short, “Why change?”

Section B looks backward a full century to the brutal competition that winnowed 1,900 companies down to a small handful and ultimately the Big Three. This is a story about standardization, economies of scale, R&D, and picking and executing the right strategy–i.e., one that results in sizable profits, thus enabling management to stay in a game that ultimately ends in consolidation.  It’s also the story that has the greatest parallel with the emerging one-to-many legal landscape–i.e., our future.

The timeline below summarizes the core Part I narrative.

... Starting in the 1960s and 1970s, foreign carmakers began to make inroads in the US market with smaller cars selling at lower prices.  The fat and happy US automakers largely ignored them, primarily because it was hard to make money selling smaller, lower-priced cars.  Yet, the Japanese automakers soon proved that lower prices were not synonymous with lower quality. In turn, this enabled companies such as Toyota, Honda, and Mazda to climb the value chain, eventually becoming fierce competitors in all market segments.

The graphic below shows the trendlines. 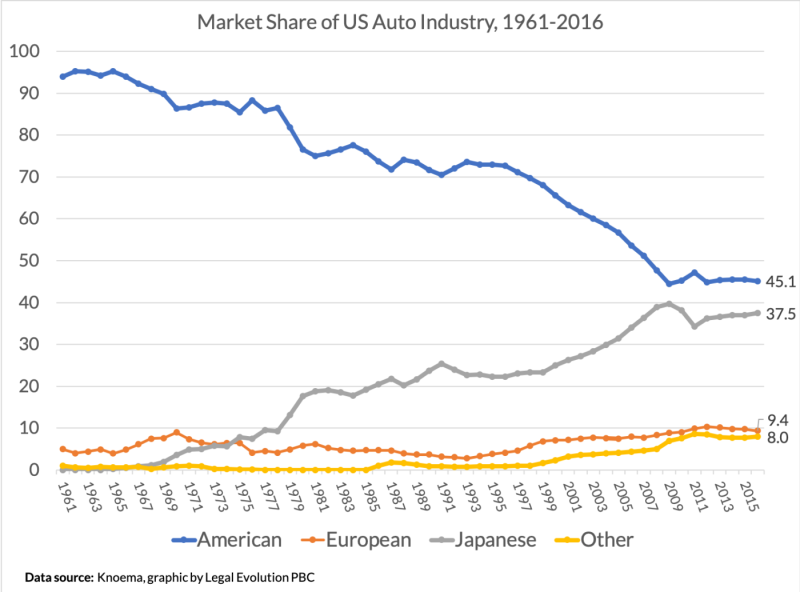 Over the last three decades, we’ve witnessed a similar reallocation of legal work away from large law firms and toward corporate legal departments.  Below is a graphic that has appeared in earlier Legal Evolution posts. See, e.g., Post 003 (reporting on massive insourcing of corporate legal work); Post 126 (discussing human capital needed for emerging one-to-many legal sector). Remarkably, there are now more US lawyers working in-house (~108,000) than are working domestically at AmLaw 200 law firms. ...

Surviving and thriving in today’s one-to-many legal solutions market is not for the faint of heart.  Every day is a continuous learning process of bolting together offerings that solve real problems—not tomorrow, but today!  Further, this daunting task must always be accomplished without running out of cash.

So why do something this hard?   Because getting wealthy is, at best, a second-order effect of doing what innovators are naturally compelled to do, which is to innovate solutions to difficult problems.  For founders and their teams of fellow innovators, a huge part of the attraction is making the practice of law demonstrably better for all stakeholders — i.e., seeing that the idea stuck in your head actually works.

By conventional standards, virtually every professional working in the emerging one-to-many legal sector is choosing a risky and seemingly imprudent career path.  Yet, they are functionally “getting paid” through the act of innovation.  Over the full arc of their careers, most of these innovators will do fine. And fortunately, a few will get extraordinarily rich. ...

Conclusion
Akin to the auto industry in the early 20th century, the one-to-many legal market marketplace is crowded and chaotic because an entire generation of legal innovators can now see in their heads the dynamism and potential of a new way of practicing law. What they do not see, however, just like the original auto entrepreneurs, are the many challenges that must be resolved in order for their one-to-many offering to attain widespread adoption.

To the extent that the law is different than cars, these differences all cut in the direction of longer bake times for law. Thus, just like the auto industry in 1905, the full potential of the one-to-many legal marketplace will likely take one or more generations to unfold.  Fortunately, for many legal innovators, the satisfaction of improving the practice of law for clients and other end-users is often its own reward, making the long and arduous journey worthy of our professional dedication.