Bias Is A Big Problem. But So Is Noise. 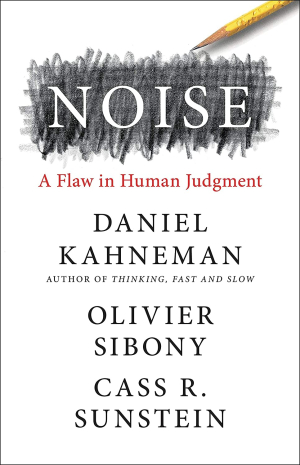 Society has devoted a lot of attention to the problem of bias — and rightly so. But when it comes to mistaken judgments and unfortunate decisions, there is another type of error that attracts far less attention: noise.

To see the difference between bias and noise, consider your bathroom scale. If on average the readings it gives are too high (or too low), the scale is biased. If it shows different readings when you step on it several times in quick succession, the scale is noisy. (Cheap scales are likely to be both biased and noisy.) While bias is the average of errors, noise is their variability.

Although it is often ignored, noise is a large source of malfunction in society. In a 1981 study, for example, 208 federal judges were asked to determine the appropriate sentences for the same 16 cases. The cases were described by the characteristics of the offense (robbery or fraud, violent or not) and of the defendant (young or old, repeat or first-time offender, accomplice or principal). You might have expected judges to agree closely about such vignettes, which were stripped of distracting details and contained only relevant information.

But the judges did not agree. The average difference between the sentences that two randomly chosen judges gave for the same crime was more than 3.5 years. Considering that the mean sentence was seven years, that was a disconcerting amount of noise.

Noise in real courtrooms is surely only worse, as actual cases are more complex and difficult to judge than stylized vignettes. It is hard to escape the conclusion that sentencing is in part a lottery, because the punishment can vary by many years depending on which judge is assigned to the case and on the judge’s state of mind on that day. The judicial system is unacceptably noisy. ...

Noise causes error, as does bias, but the two kinds of error are separate and independent. ...

Once you become aware of noise, you can look for ways to reduce it. For instance, independent judgments from a number of people can be averaged (a frequent practice in forecasting). Guidelines, such as those often used in medicine, can help professionals reach better and more uniform decisions. As studies of hiring practices have consistently shown, imposing structure and discipline in interviews and other forms of assessment tends to improve judgments of job candidates.

No noise-reduction techniques will be deployed, however, if we do not first recognize the existence of noise. Noise is too often neglected. But it is a serious issue that results in frequent error and rampant injustice. Organizations and institutions, public and private, will make better decisions if they take noise seriously.