Bank Reviews Rebellion, Rascals, And Revenue: Tax Follies And Wisdom Through The Ages 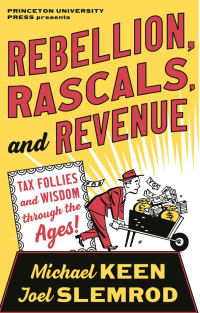 To be sure, the book is ambitious, sometimes perhaps overly so. As Robert Browning once wrote, though, “a man’s reach should exceed his grasp. Or what’s a heaven for?” And for the tax aficionado, this book really is heaven. It covers taxes from all around the world and of all types, from income to VAT, excise to wealth, and even dog to cat. No tax anecdote is too ancient, too recent, or even too fictional to be included within the book’s scope, sometimes in the same chapter or even the same paragraph. It often feels like a breakneck tour through political and popular cultural history as the authors seek to cram in one fascinating reference after another without allowing the reader to stop for a breath. For example, one chapter includes mentions of King Chu Huai (from 323 BCE China), Mithridates IV (from 88 BCE Asia Minor), Jesus, Thomas Paine, John Locke, Adam Smith, Geoffrey Chaucer, Herman Melville, Chester Arthur, Henri Rosseau, Martin Luther King, Jr., Richard Nixon, and Nina Olson (formerly of the U.S. Office of the Taxpayer Advocate). Another mentions movies such as Star Wars I: The Phantom Menace and books such as Thomas More’s Utopia (1516), Edward Bellamy’s Looking Backward (1888), August Schwan’s Towards a New Social Order (1922), Robert Heinlein’s The Moon is a Harsh Mistress (2008), Douglas Adams’ The Restaurant at the End of the Universe (1980) (part of his Hitchhiker’s Guide to the Universe series), Ayn Rand’s Atlas Shrugged (1957), and George Orwell’s Nineteen Eighty-Four (1949), while others mention board games, such as the 1906 precursor to Monopoly, called The Landlord’s Game, as well as the 1981 board game Stick the IRS: The Tax Shelter Game and rock bands, such as the Beatles, the Who, and the Kinks. Of interest to this particular reader, there is even a footnote reference to football (soccer) in the last chapter to explain the choice to provide eleven (rather than ten or twelve) lessons to be divined from the historical tax episodes mentioned in the preceding chapters. It is hard to imagine that the authors left much, if anything, from their research on the cutting room floor.

Notwithstanding its “romp through tax history” feel, to call the book a mere random collection of interesting tidbits and trivia would be to undersell much of its charm, as well as to overemphasize its chaos. Broadly speaking, it is focused thematically rather than chronologically. As a result, the title is not merely alliterative, but it describes three of the enduring themes illustrated by the historical examples in the book, each of which is inextricably linked with a fourth theme about the need for policymakers to consider fairness, or at least to understand who the winners and losers are, in the tax provisions that they adopt.

First, taxes are frequently associated with rebellion in historical accounts, but as a symptom, or the final straw, rather than the cause of those rebellions. Even where tax was one of the precipitating factors, the mechanism has often been misunderstood or oversimplified. On the latter point, the authors cite the Boston Tea Party, which famously has come to symbolize populist revolt against oppressive taxation, but according to the authors was about a tax cut rather than a tax increase. By permitting the British East India Company to sell its tea directly to the colonies without stopping first in England and paying a tariff, England allowed the company to better compete with smugglers on price even though it continued to levy an import tax on tea when it arrived in America. This outraged the smugglers, of which John Hancock was one of the richest in Boston, who viewed England’s attempt to get the colonists to buy the tea taxed in America as a threat to the business of the smugglers. At the same time, patriots such as Hancock ally Samuel Adams were worried that if colonists switched from purchasing the smuggled to the taxed tea, it would legitimate British power to levy a tax on the importation of goods to the colonies. According to the authors, if the episode symbolized anything, it was “the power of interest groups” and the importance of “the way in which taxes were implemented.”

Second, tax avoidance and evasion are the enduring legacies of virtually every tax system, and the clues to such behavior are often found deeply embedded in society. For example, tax has historically been blamed for design features in buildings and other aspects of a city that people today find peculiar or downright ugly. As the authors explain, this was often a consequence of a desire to find less intrusive (and safer) ways to value assets for property tax purposes. By focusing on features the assessors could see from the outside, such as the number of windows in a building or the length and breadth, but not the depth, of a ship, the legislature could allow them to perform their job without intruding on a taxpayer’s space and potentially engaging in dangerous interactions with them. Not surprisingly, though, instead of simply facilitating compliance in tax collection, the unintended consequence of using these proxies for wealth and value was to create an incentive for property owners to remove the proxies. That, of course, left the buildings dark because owners boarded them up and the ships thin, deep, and “not wholly seaworthy” because shipbuilders redesigned them to reduce the tax burden. These creative efforts at tax avoidance become enmeshed in the culture and often outlived the taxes that created them. In one example, the authors attributed the development of “skinny” or “shotgun” houses – so named, according to a New Orleans paper in 1917, “because you can stand in the front door and shoot the dinner off the stove in the kitchen,” to a tax based on the façade of a building that was used in Dutch property tax systems hundreds of years ago. The design was then brought to the Western Hemisphere when the Dutch colonized parts of the Caribbean.

Third, raising revenue is a difficult task and the making of the rules designed to accomplish that task is, as the authors put it, “always unlovely.” Thus, they offer numerous examples of lobbying for specific tax provisions. Sometimes, these taxes were designed to kill off competitors, such as the adoption a special 2 cent per pound tax on margarine in the Federal Margarine Act in 1886 after the U.S. dairy industry became concerned that consumers would choose the cheaper product, or, what the authors, with tongue firmly planted in cheek, called “The Taxes Chain Store Massacre,” involving states imposing taxes on new chain stores such as J.C. Penney, Walgreens, and A&P during the 1930s to protect small businesses. Other times, tax policy was dictated by political realities emanating from below rather than above, such as England’s decision to remove wartime excise taxes on meat, bread, and vegetables (but not beer) after riots in 1647 in London’s Smithfield Market.

If I were to add a broad theme that is not explicitly named and discussed in the book on a stand-alone basis, it would be the extent to which society has influenced taxation as much or more as taxation has influenced society. This is a common omission in the study of tax, which is often focused more on how tax influences behavior, than on how changes in behavior influence the development of tax systems. For example, the move of wealth from exclusively tangible forms such as land and buildings to intangible forms such as stocks and bonds, which became widespread starting in the 19th century, was in most cases not about tax avoidance. Nevertheless, governments had to take these changes into account in designing their tax systems. Similarly, the retention of earnings by U.S. corporations that had previously distributed all of their profits to shareholders each year was not a reaction to taxes, but it necessitated the move to more entity-based taxation at the beginning of the 20the century. In an example the authors do mention, but not as part of this broader theme, the increasing mobility of intellectual property and wealth enabled countries to compete on taxation and has forced countries to abandon purely national conceptions of tax systems to stem avoidance. More attention to the bi-directional nature of the influences of tax on society and society on tax might help policymakers to anticipate changes and build the flexibility to adapt to those changes before they occur.

This is perhaps an unfair criticism. Although the book does identify themes as a way to synthesize the lessons of history and to provide a jumping off point for modern theoretical discussions in public finance about things such as the norms of arm’s length pricing and physical presence in the international tax system or the distortions created by the corporate tax system, the authors do not claim to have divined a comprehensive theory of taxation from their historical research. Indeed, the book is not even a scholarly academic book in the traditional sense. The authors admit that some of the stories may be tall tales more than tax ones and, because of the large volume of them, they are necessarily presented without the kind of historical context that would give the reader comfort that the authors’ have not discussed them with the presentism of a 21st century perspective. As the authors explain, that was not their primary objective anyway. Instead, they sought “to entertain, persuading the skeptical that tax is not just important but also interesting.” In that sense, the book’s title probably deserves a fourth “R,” both because it is a raucous good time for anyone who works in, around, and with taxes for a living and, perhaps, unintentionally, because the risqué painting of Lady Godiva, the 11th century tax protester, and the gruesome images evoked from the description of Vlad the Impaler, the 15th century prince who earned his nickname because of his methods of punishing those who refused to pay the taxes owed to him, may make it adult reading only. In movie terms, it is like a summer blockbuster, although one that will have staying power even if Congress manages to push forward a different summer blockbuster in the form of legislation to implement President Biden’s promised tax agenda.