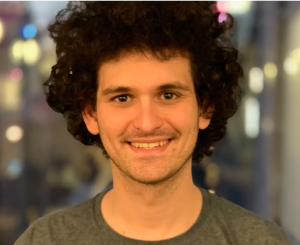 Vox Recode, How a Crypto Billionaire Decided to Become One of Biden’s Biggest Donors:

An interview with Sam Bankman-Fried, who uses math for ... everything.

One of the people who Joe Biden should thank for becoming president is a 28-year-old cryptocurrency zealot who sleeps on an office beanbag chair most nights, believes businesses focus too much on social responsibility, and has, seemingly out of nowhere, become worth $10 billion.

This is Sam Bankman-Fried, who represents a new breed of entrepreneurs who think obsessively — and, at times, counterintuitively — about the value of becoming rich. Their civic-mindedness doesn’t lead them into do-gooder careers, but into earn-earn-earn careers where they can maximize their fortunes. And Bankman-Fried has ridden the crypto boom to more or less check off part one of his two-part plan, which goes like this:

Make a tremendous amount of money by any means necessary. Then give it all away by the best means possible.

Wall Street Journal, This Vegan Billionaire Disrupted the Crypto Markets. Stocks May Be Next.:

Want to trade Tesla Inc. TSLA 0.13% 24 hours a day? How about betting on how Robinhood Markets Inc. stock will fare in its initial public offering? Or on whether Donald Trump will retake the presidency in 2024?

All that and more is available on FTX, one of the world’s fastest-growing cryptocurrency exchanges—but not if you’re American. In that case, the hottest and riskiest markets of this Hong Kong-based exchange are off limits, a move FTX made to keep from running afoul of U.S. regulators.

FTX is the brainchild of Sam Bankman-Fried, a 29-year-old billionaire who sticks to a vegan diet, shares a Hong Kong apartment with roommates and often sleeps on beanbag chairs in the office. The California native drew attention last year when he gave $5 million to a group backing Joe Biden’s campaign, making him the second-biggest CEO supporter of Mr. Biden after Michael Bloomberg, according to an analysis by The Wall Street Journal. ...

FTX doesn’t disclose its financials, but its rise has vaulted Mr. Bankman-Fried into the ranks of the world’s richest people. Earlier this month, Forbes estimated his net worth at $8.7 billion, most of which is tied up in his ownership stake of FTX and various tokens. ...

The son of two Stanford Law School professors, Mr. Bankman-Fried studied physics at the Massachusetts Institute of Technology and initially considered a career in academia. Instead, he became turned on to the “effective altruism” movement, which encourages people to maximize the amount of positive social impact they have. He decided to go into finance, hoping to make a fortune so he could give it away to charity. ...

Among the organizations that Mr. Bankman-Fried has supported are OpenAI, a research lab that seeks to ensure that artificial intelligence benefits humanity, and the Nuclear Threat Initiative, which aims to reduce the threat from nuclear and biological weapons.

Despite being a big-time donor, he hasn’t met the president. “I’d love to talk to him about crypto regulation,” Mr. Bankman-Fried said. “But I don’t think he gives a shit.”