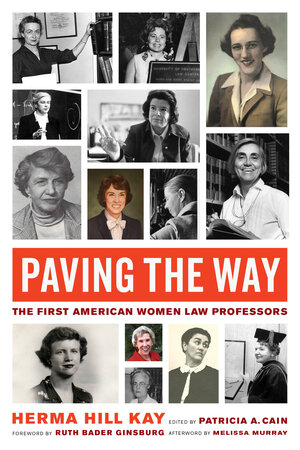 The first wave of trailblazing female law professors and the stage they set for American democracy.

When it comes to breaking down barriers for women in the workplace, Ruth Bader Ginsburg’s name speaks volumes for itself—but, as she clarifies in the foreword to this long-awaited book, there are too many trailblazing names we do not know. Herma Hill Kay, former Dean of UC Berkeley School of Law and Ginsburg’s closest professional colleague, wrote Paving the Way to tell the stories of the first fourteen female law professors at ABA- and AALS-accredited law schools in the United States. Kay, who became the fifteenth such professor, labored over the stories of these women in order to provide an essential history of their path for the more than 2,000 women working as law professors today and all of their feminist colleagues.

Because Herma Hill Kay, who died in 2017, was able to obtain so much first-hand information about the fourteen women who preceded her, Paving the Way is filled with details, quiet and loud, of each of their lives and careers from their own perspectives. Kay wraps each story in rich historical context, lest we forget the extraordinarily difficult times in which these women lived. Paving the Way is not just a collection of individual stories of remarkable women but also a well-crafted interweaving of law and society during a historical period when women’s voices were often not heard and sometimes actively muted. The final chapter connects these first fourteen women to the “second wave” of women law professors who achieved tenure-track appointments in the 1960s and 1970s, carrying on the torch and analogous challenges. This is a decidedly feminist project, one that Justice Ruth Bader Ginsburg advocated for tirelessly and admired publicly in the years before her death.

"In person, I quickly comprehended, Herma has a quality that cannot be conveyed in words. There is a certain chemistry involved when one meets her, something that magically makes you want to be on her side.”—Ruth Bader Ginsburg, from the Foreword

"If you admired Justice Ruth Bader Ginsburg, you should love this book by Herma Hill Kay, the woman law professor whom RBG used as her own model for her life in the law."—Nina Totenberg, Legal Affairs Correspondent, National Public Radio

"Legendary professor, dean, law reformer, and mentor, Herma Hill Kay has written a lively and memorable  book about the first women to become American law professors and their legacies. Shining a light on three women who  joined law faculties before World War II and eleven more pioneers during the civil rights and women's movements, Paving the Way illuminates how uniquely extraordinary individuals and social contexts changed law schools, law, and America. Come for the 'firsts,' stay for the individual portraits of remarkable and pathbreaking women, and emerge with a biography of law and society during pivotal times."—Martha Minow, professor and former dean, Harvard Law School

"A lively and important history of the legal world which Herma Hill Kay entered a half century ago—and had a substantial role in transforming. Readers are likely to be surprised by what they find here. Paving the Way is a major contribution to our understanding of professional life in our own time."—Linda K. Kerber, author of No Constitutional Right to Be Citizens: Women and the Obligations of Citizenship