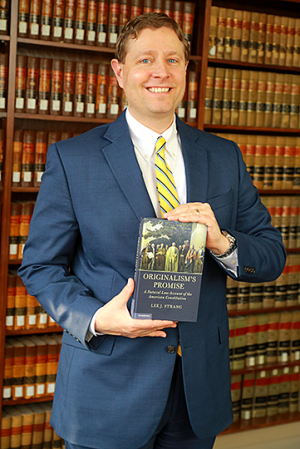 Students at the University of Toledo are pushing back against the selection of a law professor who, as a Harvard law student, opined in support of laws against same-sex relationships, as the school's faculty Diversity and Inclusion Award winner.

Last Wednesday, the university awarded Lee Strang, a faculty law professor since 2008, its second annual Inclusive Excellence Award for faculty. The award — which started in 2019, but was paused in 2020 due to the coronavirus pandemic — is nomination-based, and seeks to honor individuals who display efforts to make UT a "more inclusive and equitable" campus.

After the announcement of the award, backlash started on social media among students and Facebook commenters who resurfaced an op-ed from 2003 from Mr. Strang, then a conservative-leaning law student at Harvard Law School.

In the essay titled "Private" acts, public harm, published in The Harvard Law Record [more here], Mr. Strang commented on the landmark Supreme Court's Lawrence vs. Texas case which eventually ruled that U.S. laws prohibiting private homosexual activity are unconstitutional. In his piece dated before the Supreme Court ruling, Mr. Strang argued certain groups of people were harmed by "a society that does not proscribe homosexual activity."

"Parents such as my wife and I are especially harmed because a corrupt society that does not seek to prevent homosexual activity makes it more difficult for us to properly raise our children," Mr. Strang wrote.

After the content of the op-ed was shared, and commenters on the University of Toledo Law School's Facebook page voiced their opposition to the award being given to Mr. Strang, UT student Liam Walsh began a petition that demands the school revoke the award. As of Monday afternoon, 934 people had signed the petition. ...

In an interview with The Blade, Mr. Strang said reading parts of some of his old writings makes him "cringe." So much so, he moved to ask Harvard to take them down. He said, although he still maintains religious viewpoints, he regrets how he presented his arguments back then, which he said were "aggressive," and not done in a way that's "respectful and civil."

"I regret using the language that I used in those articles," he said. ...

In response to some of the backlash from students, [Willie McKether, UT's vice president for diversity and inclusion,] wrote an op-ed in the UT publication "UToday," that Mr. Strang "received an overwhelming number of faculty nominations focused on his presence in the classroom where he enjoys and respects a good healthy debate, as one nominator wrote. The individuals who nominated Strang for the award recognized his conservative point of view as a minority in academia and a benefit to legal debate." ...

Mr. McKether told The Blade he is aware of the petition, but has no plans to revoke the award from Mr. Strang. He declined to comment on whether he knew about Mr. Strang's previous writings before the award was given, but said his office is working to improve the award's process to get a wider selection of nominations. To do so he intends for more promotion of the award and to include alumni in the process in the future.