Its rise is an illusion created by the Census Bureau’s failure to account for taxes and welfare.

The refrain is all too familiar: Widening income inequality is a fatal flaw in capitalism and an “existential” threat to democracy. From 1967 to 2017, income inequality in the U.S. spiked 21.4%, and everyone from U.S. senators to the pope says it’s an urgent problem. Yet the data upon which claims about income inequality are based are profoundly flawed.

We have shown on these pages that Census Bureau income data fail to count two-thirds of all government transfer payments—including Medicare, Medicaid, food stamps and some 100 other government transfer payments—as income to the recipients. Furthermore, census data fail to count taxes paid as income lost to the taxpayer. When official government data are used to correct these deficiencies—when income is defined the way people actually define it—“income inequality” is reduced dramatically.

We can now show that if you count all government transfers (minus administrative costs) as income to the recipient household, reduce household income by taxes paid, and correct for two major discontinuities in the time-series data on income inequality that were caused solely by changes in Census Bureau data-collection methods, the claim that income inequality is growing on a secular basis collapses. Not only is income inequality in America not growing, it is lower today than it was 50 years ago. ... 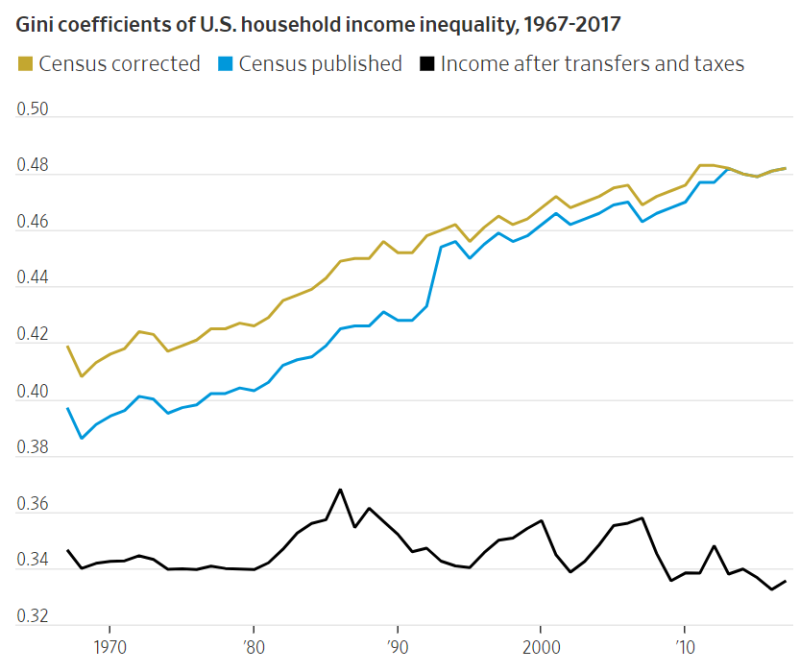 The raging debate over income inequality in America calls to mind the old Will Rogers adage: “It ain’t what you don’t know that gets you into trouble. It is what you do know that ain’t so.” We are debating the alleged injustice of a supposedly growing social problem when—for all the reasons outlined above—that problem isn’t growing, it’s shrinking. Those who want to transform the greatest economic system in the history of the world ought to get their facts straight first.