Dorothy Brown: ‘The System For Wealth Building Is Designed To Build White Wealth’ 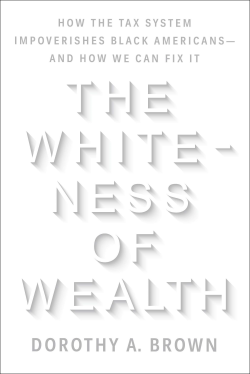 How often do you think about your taxes? Once a year, maybe, when it’s time to file, or when you got married, or when you bought a home? If you’re white, taxes are often an inconvenience at worst. The tax code may even benefit you when you get married and start filing a joint return. If you’re Black, says Emory University law professor Dorothy Brown, your story is likely different: The joint return is less likely to reward a marriage with a tax cut when two spouses of equal income work outside the home, something that’s more likely to be true of Black couples. That’s not an accident, she argues in her new book, The Whiteness of Wealth. Well-off, mostly white Americans litigated and lobbied their way into making sure the tax code protects their wealth. Black Americans, who typically lack family wealth, were left out and deliberately held back. They can’t catch up, and that’s the point. The system is working as designed for whom it was designed: white Americans.

In The Whiteness of Wealth, Brown brings the American tax code to life. Hands shape it and wield it like a shield in the defense of the most powerful among us. The tax code tells a story about American priorities. The news isn’t good, Brown writes, but there’s still time to change the future.

This interview has been edited for clarity and condensed for length. ...

What are the long-term consequences for Black Americans if we fail to enact the reforms that you discuss in your book?

Well, the racial wealth gap will continue to grow. And you might see Black Americans start to disengage from the American project. If, as I’ve shown, the system for wealth building is designed to build white wealth while stripping Black Americans of what little we have, then why should we buy into this system? Maybe we shouldn’t. So to me, part of America going forward is Black Americans believing we could get ahead. And what my book shows is that most of us can’t get ahead.