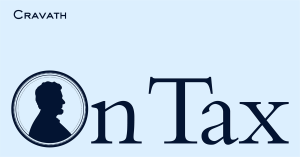 On April 2021, Cravath launched its On Tax podcast, a program designed to highlight, through conversation, the people, connections and stories that make the tax space such a fascinating and dynamic area of practice.

On each episode of On Tax, partner and host Len Teti speaks to professionals in the Cravath network about their life and work in the world of tax. The first three episodes are now available:

Episode 1 – Steve Gordon of Cravath
Steve Gordon served as Head or Co‑Head of Cravath’s Tax Department from 2000 through 2020. In this episode of On Tax, he talks about the many different paths people take into tax law, how his interest in transactional work led him to the tax practice at Cravath, and the collaborative, trusting culture he worked to cultivate in his years leading the Firm’s Tax Department.

Episode 2 – Alyson Lawrence of Johnson & Johnson
Alyson Lawrence is Vice President, Tax Planning and Counsel, at Johnson & Johnson. A third‑generation CPA, Alyson grew up on a peach farm in southern New Jersey before she attended Georgetown and UVA Law. In this episode of On Tax, she talks about her experiences at a Big Four accounting firm and as an associate at a law firm in Washington, D.C. before turning to an in-house position at J&J.

Episode 3 – Larry Pasini of Pasini Law
A born and raised New Yorker, Larry Pasini grew up in Queens before receiving full scholarships to attend Fordham and St. John’s Law. In this episode of On Tax, he talks about his experiences at three of the top law firms in New York City, including Cravath, and his decision to start his own law practice in 2017.