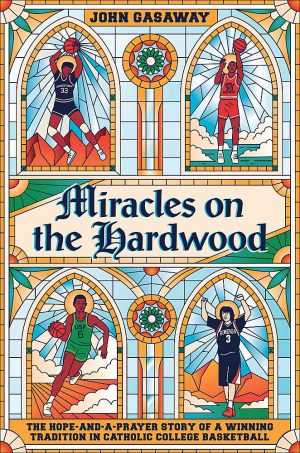 In Miracles on the Hardwood, a history of Catholic college basketball, ESPN’s John Gasaway begins his story by observing a paradox about the origins of the game: “Basketball was invented to save Protestant men’s souls.” Its founding father, James Naismith, was “a pious Presbyterian” who worked at a YMCA in Springfield, Mass., where he sought to devise a sport that his co-religionists could play indoors. He borrowed the idea of a goal from hockey and lacrosse. His innovation was to orient the goal itself horizontally rather than vertically. Players didn’t throw a ball at an upright target but lofted it above their heads and hoped it would drop through a halo-like hoop.

Naismith probably never imagined how much his newfangled sport would mean to Catholics. “For many Americans, college basketball is the outward and visible sign of Catholicism in the United States,” observed the late Frank Deford in 1985, when Georgetown and St. John’s joined eventual champion Villanova in the Final Four. Mr. Gasaway chronicles this and just about every other significant Catholic moment in college basketball, but he avoids turning out a tale of triumphalism: “Catholic teams on the whole may be characterized more aptly as good or very good rather than as dominant or elite.” ...

He writes virtually nothing about the role of faith, except to remark that players “have always professed all manner of evolving beliefs, agnosticisms, skepticisms, and disbeliefs.” ... By the book’s final pages, Mr. Gasaway appears to have given up on the search for a deeper meaning. He confesses: “If there is a specifically Catholic secret sauce for basketball success, it remains elusive.”

A priest might suggest that God has something to do with it. James Naismith, for his part, would have been pleased to know that Mark Few, the celebrated coach of Gonzaga’s team for the past two decades, is the son of a Presbyterian minister.

“John Gasaway captures the essence of basketball as religion in MIRACLES ON THE HARDWOOD. From Bill Russell and USF to Mark Few and Gonzaga to Jay Wright and Villanova, Catholic schools have had tremendous success and are woven into the fabric of the game. My confession? I would have sinned if I hadn’t read this book. If you love the game, Gasaway illuminates its rich history in Miracles on the Hardwood."―Jay Bilas, ESPN

"John Gasaway has always covered basketball with mathematical precision and religious fervor. That makes him the perfect author to lay out a historical narrative that feels both sweeping and intimate. It might seem like divine providence that has enabled so many Catholic schools to produce winning basketball teams, but Gasaway neatly lays out the cultural, economic and competitive factors that have allowed that to happen, with all the color and entertainment you would expect from this cast of characters. Whether you are a Don, a Zag, a Hoya or a Rambler, this book will send you on a heavenly journey."―Seth Davis, author of Wooden: A Coach's Life