Bar Exams May Soon Be Easier To Pass, As States Eye Changes

Several states say they could make their bar exams easier to pass as a way to address racial diversity problems and access-to-justice issues entrenched in the legal profession.

Their statements coincide with the first data from California, which permanently lowered its “cut score” last summer just incrementally—but saw significant changes in the racial make-up of those passing the test to become its newest lawyers.

Last week, Rhode Island became the first to follow suit in lowering the state’s cut score. Several others say they’ll soon be weighing similar reforms. ... Court officials from Texas, Arizona, and Michigan said they’re also monitoring efforts from a national testing group to modify the bar exam, with an eye toward eventual changes in their own states. ...

Several other states—including New York, Pennsylvania, Connecticut, North Carolina, and Utah—said they could consider lowering cut scores based on their own reviews and after studying how the moves play out elsewhere. Their answers came in response to questions from Bloomberg Law to bar exam authorities and top courts in the 50 states and Washington, D.C.

What California Found
Lowering exam passing scores even slightly could boost the ranks of Black and Hispanic attorneys, according to the data from the State Bar of California released on March 5.

The state found that lowering the cut score from by about 3.5%—from a score of 1,440 to 1,390—led to about a 15% higher passage rate than would have been the case had the cut score not been lowered, said California state bar spokeswoman Teresa Ruano. 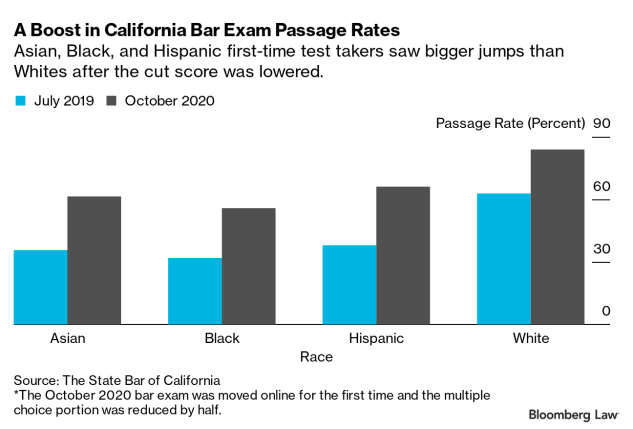 Other factors may also have contributed to the jump in passage rates. California and several states that moved their tests online for the first time reported an upswing in passage rates in 2020. The multiple choice portion of the test was cut in half for the October 2020 exam to 100 questions.

The Bloomberg piece suggests that states are lowering bar exam cut scores “as a way to address racial diversity problems” in the legal profession. That assertion is misleading and dangerous. Lowering cut scores will (by definition) boost pass rates for all students, and doing so may benefit students of color more than their white counterparts, but the article fails to mention that many aspects of the bar exam disparately benefit white students and students from privileged backgrounds. To take just one example of this testing bias, students who can afford costly test-prep courses for the SAT/ACT and LSAT learn test-taking tricks that also help them on the bar. Yet such tricks have nothing to do with competent lawyering. The Bloomberg article should have mentioned this and other disparate impacts of standardized testing. By discussing the differential benefits of lower cut scores without exploring the inherent biases of the bar exam itself, the Bloomberg article implies, incorrectly and harmfully, that any fault for lower pass rates lies with law students of color rather than with our flawed and biased educational and testing systems.