UVA Podcast With Michael Graetz: The Wolf At The Door — The Menace Of Economic Insecurity And How To Fight It 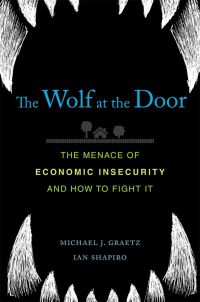 Focusing on employment policies can help reduce the threat of economic insecurity in the United States, Columbia Law School professor Michael Graetz ’69 says on the latest episode of “Common Law,” a podcast sponsored by the University of Virginia School of Law.

Americans today can expect to change jobs 12 or 15 jobs in their lifetime, says Graetz, a UVA Law alumnus and former professor. That may be a welcome challenge for the college educated, he says.

“But when you take a middle-aged man or woman who has only a high school education, who's been working for a number of years, becoming unemployed is really devastating, not only to their way of life economically, but also psychologically,” he says on the show. “We just don’t have a good safety net in the United States.”

Graetz recently co-authored The Wolf at the Door: The Menace of Economic Insecurity and How to Fight It with political scientist Ian Shapiro, the latest in a string of books he has written on the economy and on tax law.

In the book and on the show, Graetz suggests the solutions to economic insecurity should focus on employment, and range from a national unemployment insurance program to building more infrastructure, which will create jobs. Graetz doesn’t object to raising taxes on the wealthy, he said, but “I just don't think that increasing taxes on the wealthy alone is going to solve the problems of economic insecurity.”