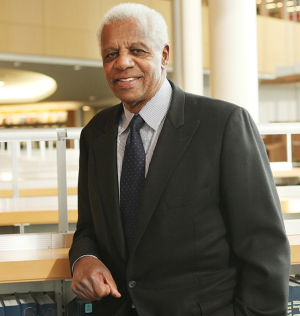 Please join the United States Tax Court for the second in a series of monthly programs celebrating diversity and inclusion in tax law. Moderated by Chief Judge Maurice B. Foley, March’s webinar will focus on Samuel C. Thompson, Jr., Director of the Center for the Study of Mergers and Acquisitions at Penn State Law. Today at 7:00-8:15 PM EST (register here).

Samuel C. Thompson, Jr. directs Penn State’s Center for the Study of Mergers and Acquisitions. He is also a Professor of Law and the Arthur Weiss Distinguished Faculty Scholar. He teaches mergers and acquisitions, focusing on corporate, securities, tax, accounting, and antitrust aspects of these very complex transactions. He also teaches several tax courses. Beginning with the Spring semester 2021, he is teaching a course entitled: The Lawyer’s Role in Helping Close the Minority-White Gap in Business Ownership.

Professor Thompson has served in two governmental tax policy positions, one in the U.S. Treasury’s Tax Legislative Counsel’s Office and one as the tax policy advisor, on behalf of the U.S. Treasury Department’s Tax Assistance Office, to the South African Ministry of Finance in Pretoria, South Africa. In that second role he assisted with the revision of South Africa’s income tax system.

He has served as a consultant on merger and acquisition issues to the Federal Trade Commission, a professor in residence at the European Commission’s Antitrust Merger Taskforce in Brussels, and an Attorney Fellow in the Office of Mergers and Acquisitions of the Securities and Exchange Commission. He has presented tax policy testimony before the U.S. House of Representatives, the U.S. Treasury, and the IRS.

Professor Thompson is the author of over twenty books, including two treatises published by the Practicing Law Institute. He is also the author of more than seventy-five articles on corporate and international tax, and on corporate, antitrust, and securities issues relating to mergers and acquisitions.

He has a B.S. from West Chester University, where he was on the varsity football team; an M.A. in Business and Applied Economics from the Graduate School at the University of Pennsylvania; a J.D. from the University of Pennsylvania’s Law School; and an LLM in taxation from the NYU School of Law. From 1966 to 1969 he served in the USMC, rising to the rank of captain and receiving the Navy Commendation Medal with Combat V for service in Vietnam.