Washington Post, The IRS Paid $3 Billion in Interest to Taxpayers Because It Failed to Get Refunds Out on Time:

The IRS penalizes taxpayers who don’t pay their tax bills on time, but the agency’s own delays are costing taxpayers billions of dollars as well.

The IRS paid $3.03 billion — yes that’s with a “b” — in interest on delayed refunds to taxpayers for fiscal 2020 because it didn’t get the payments to them in time, according to a report released by the Government Accountability Office this week [Actions Needed to Address Processing Delays and Risks to the 2021 Filing Season (GAO-21-251) (Mar. 1, 2021)]. That’s almost a 50 percent increase compared with the $2.06 billion paid in interest on refunds in fiscal 2019.

Generally, if a return is filed on time, the IRS has a 45-day interest-free processing window. If the agency misses this deadline, interest is added to the refund. By the end of the summer, the IRS said, it had to send interest payments to nearly 14 million individual taxpayers who filed their 2019 returns on time. ...

Delays in processing returns and sending refunds aren’t just a pandemic problem, agreed Erin M. Collins of the independent Taxpayer Advocate Service, an organization within the IRS that helps taxpayers resolve issues with the agency.

The GAO report correctly identifies the elephant in the room — excessive reliance on paper for exchanging information between taxpayers and the IRS, Collins said.

“Although the IRS plans to modernize its systems to reduce the dependency on paper, it is moving toward that goal slowly due to a lack of adequate, multiyear funding,” Collins said. “IRS modernization is not a luxury or an option anymore. The 2020 filing season highlighted the result of the IRS’s continued reliance on antiquated technology.” 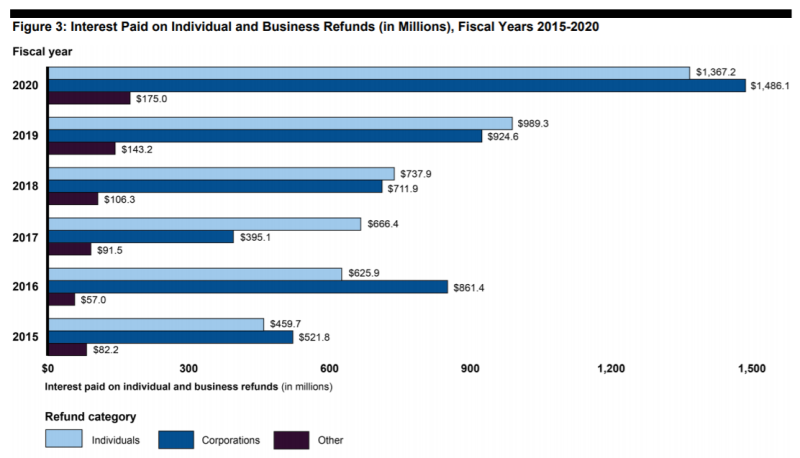