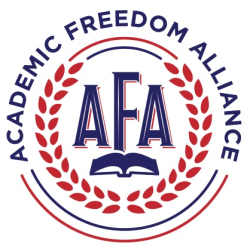 Faculty members should have less to fear from antsy administrators and Twitter mobs.

When I spoke to the Princeton University legal scholar and political philosopher Robert P. George in August, he offered a vivid zoological metaphor to describe what happens when outrage mobs attack academics. When hunted by lions, herds of zebras “fly off in a million directions, and the targeted member is easily taken down and destroyed and eaten.” A herd of elephants, by contrast, will “circle around the vulnerable elephant.”

George was then recruiting the founding members of an organization designed to fix the collective-action problem that causes academics to scatter like zebras. What had begun as a group of 20 Princeton professors organized to defend academic freedom at one college was rapidly scaling up its ambitions and capacity: It would become a nationwide organization. George had already hired an executive director and secured millions in funding.

In the summer, George emphasized that the organization must be a cross-ideological coalition of conservatives, liberals, and progressives who would be willing to exert themselves on behalf of controversial speakers no matter which constituency they had offended. Though the funding for the organization came from a primary conservative donor, and many of those who feel most besieged in today’s academic environment are on the right, the threats to academic freedom were myriad — and did not threaten only those on the right. A principled defense of core values would require scrupulous neutrality in application and significant participation from across the ideological spectrum. “If we were asked to defend Amy Wax, we would,” he said. “If we were asked to defend Marc Lamont Hill, we would.”

Today, that organization, the Academic Freedom Alliance, formally issued a manifesto declaring that “an attack on academic freedom anywhere is an attack on academic freedom everywhere,” and committing its nearly 200 members to providing aid and support in defense of “freedom of thought and expression in their work as researchers and writers or in their lives as citizens,” “freedom to design courses and conduct classes using reasonable pedagogical judgment,” and “freedom from ideological tests, affirmations, and oaths.”

The alliance will intervene in academic controversy privately, by pressuring administrators, and publicly, by issuing statements citing the principles at stake in the outcomes of specific cases. Crucially, it will support those needing legal aid, either by arranging for pro bono legal representation or paying for it directly.

“Universities know,” George told me, “that university faculty can’t afford to fight city hall or the university, so they know they can do anything to these people without any consequences. So we’re going to shift that — so that the university general-counsel offices will know that the university is in the fight of its life if it violates academic-freedom rights.” ...

Some of the founding members from outside of Princeton include Randall L. Kennedy, Orlando Patterson, Jeannie Suk Gersen, Janet Halley, and Cornel West at Harvard; Brian Leiter and Dorian S. Abbot at the University of Chicago; Sheri Berman at Barnard; and Kathryn L. Lynch at Wellesley.

I will note that in recruiting initial members, it was made very clear that the AFA would have defended Ward Churchill and Steven Salaita, as well as Amy Wax and Adrian Vermeule. That is how a principled defense of the academic freedom rights of faculty should proceed.