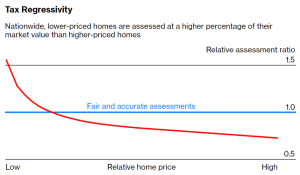 Local officials have overvalued the lowest-priced homes relative to the highest across the U.S., nationwide data show. From 2006 through 2016, inaccurate valuations gave the least expensive homes in St. Louis an effective tax rate almost four times higher than the most expensive. In Baltimore it was more than two times higher. In New York City it was three times higher.

These inequities are tucked deep inside America’s system for funding its local governments, tilting property taxes in favor of wealthy homeowners even before any exemptions or abatements. And they carry a jarring implication: The residential property tax, which raises more than $500 billion annually to pay for public schools, fire departments, and other local services, is, in effect, racist.

That conclusion carries far-reaching implications of its own—not only for municipalities’ day-to-day operations but also for roughly $331 billion in general-obligation bonds that cities, counties, and school districts have guaranteed with property tax revenue, according to data compiled by Bloomberg Businessweek. 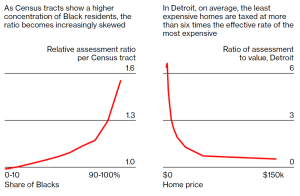 The evidence of systematic unfairness is mounting. Since at least the 1970s, piecemeal studies from Chicago, Detroit, New Orleans, and New York have concluded that property tax systems favor those who are better off. A 2020 study from the University of Chicago brings unprecedented scope to the question, covering 2,600 U.S. counties. It found that more than 9 out of every 10 reflected the same pattern of unfairness. “It’s a textbook example of institutional racism,” says Christopher Berry, a professor at the university’s Harris School of Public Policy who led the research effort.

The problem is rooted in American history. One legacy of racial discrimination, including the practice of redlining (the refusal of banks to make loans in Black communities), is that Black people own a disproportionate share of lower-valued real estate. Census data show that the median home value in predominantly Black tracts is roughly half the value in majority White and Hispanic tracts. That historical disparity has been aggravated by a flawed tax system built on incomplete data and outdated methods for estimating the value of residential properties. “There isn’t anybody making explicitly racial decisions to produce these outcomes,” Berry says. “Nevertheless, they are racially disproportionate.”

Wide variations in policies and rates among the many thousands of U.S. jurisdictions that levy property taxes make it difficult to quantify the aggregate size of the imbalances. But Berry found in 2018 that in Chicago alone, unfair assessments shifted $2.2 billion in property tax payments from those who owned the highest-valued homes to those who owned the lowest-valued homes—over only five years.