Brown: Your Home’s Value Is Based on Racism

New York Times op-ed:  Your Home’s Value Is Based on Racism, by Dorothy Brown (Emory; Author, The Whiteness of Wealth: How the Tax System Impoverishes Black Americans — And How We Can Fix It (2021)): 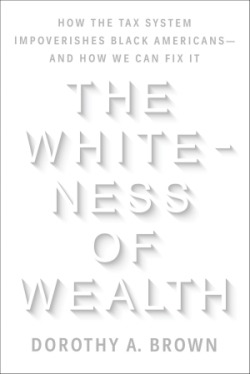 Wherever they choose to buy, Black people are penalized by white preferences. ...

Black Americans are often unable to build wealth from homeownership in the same way their white peers are, in large part because home prices are generally set by the people who make up the majority of buyers: white Americans. White families typically prefer to live in predominantly white neighborhoods with very few or no Black neighbors. Homes in these neighborhoods tend to have the highest market values because most prospective purchasers — who happen to be white — find them most desirable.

Black Americans, on the other hand, tend to prefer to live in racially diverse or all-Black neighborhoods. Research has shown that once more than 10 percent of your neighbors are Black, the value of your home declines. As the percentage of Black neighbors increases, the property’s value plummets even further. ...

Enter tax policy to add insult to injury. The typical white family has eight times the wealth of the typical Black family, a racial wealth gap that’s fueled by tax subsidies for homeownership. ...

The federal government should stop subsidizing a racist housing valuation system that’s made so by the preferences of white homeowners. It should repeal all federal tax subsidies for homeownership. Household rent is not deductible because it is considered a personal living expense. Why shouldn’t homeownership be treated the same way?

Joe Biden’s presidency could bring us one step closer to rooting systemic racism out of our tax laws. His first executive order created a data working group —  which includes the Department of the Treasury, which is responsible for administering tax laws — designed to disaggregate data by demographic variables like race and ethnicity. Collecting tax data by race is a first and necessary step in making our tax laws more equitable.

If white supremacy is to be rooted out everywhere, it must be rooted out of our tax system. Black taxpayers should not be required to finance our own subordination.