The Atlantic:  How the U.S. Tax Code Privileges White Families, by Dorothy Brown (Emory; Author, The Whiteness of Wealth: How the Tax System Impoverishes Black Americans — And How We Can Fix It (2021)): 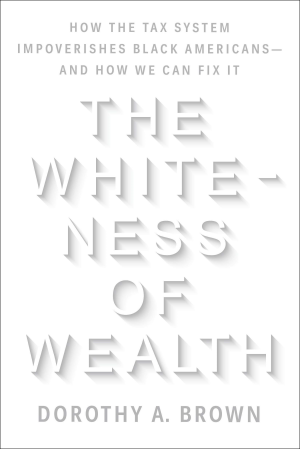 Tax policies have preserved the racial inequality that has long defined America.

Soon after I got my master’s degree in tax law from NYU in 1984, I started preparing my parents’ tax returns. They filed jointly, and what always stuck out to me was how comparable their incomes were. My mother worked as a nurse at an assisted-living facility, and my father was a plumber with the New York City Housing Authority. Some years, my father’s overtime would put him on top by a few hundred dollars; other years, my mother outearned him.

What I saw every year was what researchers call the “marriage penalty”: My parents, like many other married Black couples trying to pay for a mortgage, save for their children’s future, and afford health care, were paying higher taxes under the joint return than they would have had they remained single and filed separately. What I sensed then—and what 25 years of academic research have revealed to me in greater detail since—was that changes to the U.S. tax code typically benefit white taxpayers, while putting Black taxpayers at a further disadvantage, even when Black and white Americans have made the same life choices. Subsidies for homeownership benefit white homeowners more than Black homeowners. Tax breaks for workers benefit white workers more than Black workers. And tax reform has always been a fight over which white Americans get tax cuts, with Black Americans paying the price, as I document in my book, The Whiteness of Wealth: How the Tax System Impoverishes Black Americans — And How We Can Fix It (2021).

The U.S. tax code can seem like a neutral, or at least equally punishing, system. But that misses how it has privileged white people—particularly white married couples—and preserved the racial inequality that has long defined America. Take the joint return, for instance, a policy that was designed to give a tax break to married (heterosexual) couples in which only the husband worked in the paid labor market. That setup favored white couples, whose familial structure was most likely to fit its mold. And it came at the expense of Black married couples, including my parents. ...

For the unequal effects of marriage in the tax code, at least, the solution is easy: Return to our progressive beginnings and allow only individual tax returns. The decision on whether to get married should never have been allowed to affect anyone’s tax bill. Canada has had an individual-filing-based system for more than 100 years. Justice requires the married Henrys of the world to pay the same as the single Henrys. Racial justice requires that married couples like my parents don’t face a marriage penalty, and that they don’t get left behind when tax cuts come.