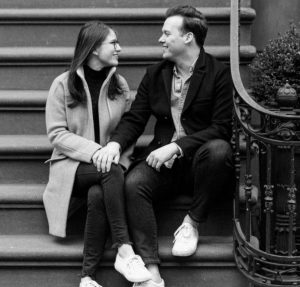 For Sarah Elizabeth Williams Gelfand and Scott David Schilson Jr. (wedding), the intense atmosphere and demanding coursework of the N.Y.U. masters of laws in taxation program — intended for lawyers who wish to deepen their knowledge in that particularly abstruse area of jurisprudence — weren’t impediments to falling in love. “It’s maybe not the most romantic place,” said Ms. Gelfand, 31, of the yearlong program. “But I realized I really liked spending time with Scott because he would make even this very dry subject matter really lighthearted and funny.”

Despite their heavy workload, being students afforded Ms. Gelfand and Mr. Schilson uncommon flexibility when they began dating during the winter of 2017. “We were able to compartmentalize the school stuff and then take advantage of a lot of the city,” said Mr. Schilson, 30. They spent much of their free time that spring sampling New York’s restaurants and bakeries. “I think we were like 50 percent study, 50 percent food,” he said.

After graduating from N.Y.U. in 2017, the couple endured almost a year and a half of geographical separation while Ms. Gelfand served as a law clerk for Judge Juan F. Vasquez of the United States Tax Court in Washington D.C. ...

After her clerkship ended, Ms. Gelfand, an associate at the law firm Day Pitney, returned to New York to live with Mr. Schilson and one of his brothers in their tiny East Village apartment, where they often hosted local friends. “It felt like a classic New York-y situation, where you’re piled in but making the best of it, having a great time,” Mr. Schilson, an associate at the law firm White & Case said. ...

The couple was married outdoors on Jan. 16 under a canopy of trees on Banyan Street in Boca Grande, Fla., before 11 guests.