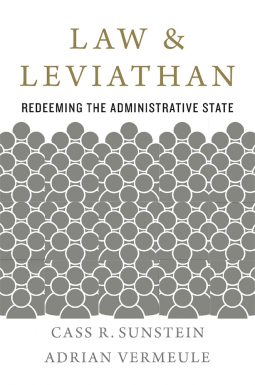 Sunstein, who was a high-ranking official in the Obama administration, is among the most cited legal scholars of his generation. He is the co-author (with Richard Thaler) of the wildly popular Nudge, which outlines a generally progressive, if eccentric, ideological project called “libertarian paternalism.”

By contrast, Vermeule is a longtime conservative intellectual who clerked for Antonin Scalia, spent the post-9/11 years devising legal apologetics for the expansion of executive power (including torture and ethnic profiling), and was recently appointed by Donald Trump to the Administrative Conference, the federal agency devoted to administration. After converting to Catholicism a few years ago, Vermeule became the most visible defender of an emergent ideology known as Catholic Integralism, which teaches that modern states must be subordinated to the spiritual authority of the Roman Catholic Church.

Sunstein’s and Vermeule’s diametrically opposed political commitments might appear to render their partnership not only implausible but unintelligible. And yet, for over a decade, the two have co-authored long works of legal analysis, most recently Law and Leviathan: Redeeming the Administrative State (Harvard University Press, 2020), in which, not unreasonably, they defend the modern administrative state’s value in securing certain societal goods.

Yet there is also a sinister side to Sunstein and Vermeule’s redemption of administrative power — one that goes well beyond rejecting the libertarian anti-statism so common in American discourse. Law and Leviathan ends up embracing an extreme form of technocracy: rule by social-scientific elites. ...

Consider the vast difference in the ideological cultures Sunstein and Vermeule defend when they are not collaborating. In Nudge, Sunstein and his co-author argue that ordinary people are subjected to frequent irrational biases that make them cognitively incapable of rational self-governance. Thus, what a rational and moral state requires is an expert class of social scientists or “choice architects” who can “nudge” and manipulate citizens toward more rational behavior through the administrative apparatus. For Sunstein, the ultimate goal is a mix of libertarianism and welfarism that in many ways echoes the ideological culture of the Obama presidency. Nudge’s major focuses are on areas of utilitarian well-being like retirement savings, health care, and schooling.

Vermeule accepts Sunstein’s mechanism — the nudge — but his ends are somewhat different. He would put administrative rules at the service of re-Christianizing society. This is what Vermeule dubs “integration from within,” in which “elite administrators” from “the commanding heights of the administrative state” exercise the technocratic knowledge of “behavioral economics” in order to “nudge whole populations in desirable directions.”

For Vermeule, that means abolishing the very liberal culture that bureaucrats in Sunstein’s regime would be seeking to nourish. Liberalism must be eliminated for its inexorable moral depravity: “Yesterday the frontier was divorce, contraception, and abortion; then it became same-sex marriage; today it is transgenderism; tomorrow it may be polygamy, consensual adult incest, or who knows what,” as he put it in First Things. All of this liberal decadence, as he explains elsewhere, might be stopped by the “integral restoration of Christendom” via “executive-type bureaucracies,” which will use social science to impose the Catholic catechism.

The morality of administrators is never enough to create a neutral, trustworthy bureaucracy. The real question is what political culture inhabits the bureaucracy. Ironically, some of the biggest pushback against the technocratic rule proposed by Sunstein and Vermeule comes from within the very political traditions they respectively claim to espouse — liberalism and Catholicism. ...

Technocracy flourishes in traditionally humanistic departments like law because its advocates are able to borrow the prestige of the STEM disciplines to bolster their own authority. Claims to a science of human life have in this way helped generate well-funded and ultra-prestigious clusters of technocratic intellectual authorities atop which sit figures like Sunstein and Vermeule, called upon by American presidents. But technocrats, for all their (often spurious) methodological wizardry, cannot easily supplant the cultural and historical modes of explanation of humanists, nor humanists’ respect for the knowledge and agency of ordinary people. Far from being morally and rationally superior, technocracy may be a significant contributor to our inability to properly deliberate upon our political problems. And if so, then the one place where Sunstein and Vermeule have managed such persistent agreement is, in fact, an area of shared and devastating blindness.