Following up on my previous post, NCBE: The Next Generation Of The Bar Exam:  Karen Sloan (Law.com), 'A Dream Come True Instead of a Nightmare': Will the Bar Exam Revamp Go Far Enough?: 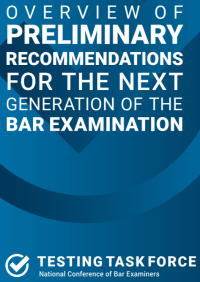 Bar exam watchers say a preliminary plan to reform the attorney licensing test to focus more on lawyering skills and less on the memorization of laws is a step in the right direction—but they warn that the planned changes may not go far enough to address what ails the current exam and will take years to implement.

Bar exam reformers and bar prep providers have spent the past week digesting a series of proposed changes that were unveiled Jan. 4 by the National Conference of Bar Examiners’ Testing Task Force, which has spent the past three years studying the exam and weighing new approaches. The proposal calls for the elimination of the three distinct test sections—the Multistate Bar Exam, the Multistate Essay Exam and the Multistate Performance Test—in favor of an integrated exam that more closely resembles the existing performance test portion. ...

Ohio State University law professor Deborah Merritt—who co-authored a recent study of the bar exam from the Institute for the Advancement of the American Legal System—said that while she welcomes a shift to a more skills-based test, it remains to be seen whether the National Conference can deliver on that front.

“[The National Conference’s] current exam attempts to test fundamental principles, rather than detailed rules, but many criticize the current exam for sliding too far towards memorization of detail,” Merritt said. “What will prevent that in the next generation exam from taking the same slide?”