Colorado Relieves John Eastman Of His Duties, Chapman Bars Him From Speaking At Law Review Symposium He Organized; Eastman Speaks At Arizona State Federalist Society Event Despite Opposition From Students And Dean

Effective Jan. 21, CU Boulder relieved John Eastman of his duties related to outreach and speaking as a representative of the Benson Center for the Study of Western Civilization. University officials determined Eastman’s continued pursuit of these duties would likely be disruptive and damage the interests of the campus and the Benson Center.

In an email to the Camera, Eastman wrote that CU Boulder “has retaliated against me for constitutionally-protected First Amendment activities. I will be exploring all options.” ...

Outreach and giving speeches are among the job duties outlined in Eastman’s offer letter, which was sent by CU Boulder in January 2020. He is earning an academic year salary of $185,000 and his duties include teaching four courses, initiating a speaker series each semester and doing outreach and speaking with different groups. He also received $6,000 for moving expenses and a $20,000 “start-up account” from the Benson Center which can be used for travel, research and teaching-related purposes. ...

The offer letter specifies that Eastman will teach two courses per semester for four courses total. But two courses he was set to teach this semester were canceled because of low enrollment — though students can still sign up for his courses as an independent study — and he is no longer speaking as a representative or doing outreach for the university.

Separation of Powers is a bedrock principle of our constitutional system of government. It is manifest most clearly in the very first provision of Article I of the Constitution—the legislative powers granted to the federal government are vested in Congress. For a long while, that was understood to prohibit the delegation of lawmaking power to anyone else—not the executive branch, not independent agencies, not the judiciary, and certainly not private entities. But that non-delegation doctrine has been a dead letter since the New Deal era of the 1930s.

Acting through the Claremont Institute’s Center for Constitutional Jurisprudence, which I founded in 1999, and with the close collaboration of my colleague, Tom Caso, I have been at the forefront of the effort pressing the Supreme Court to revive the non-delegation doctrine (and to curtail related doctrines that essentially deferred to the administrative state) and restore the Constitution’s important separation of powers principles. Recent decisions by the Supreme Court strongly suggest that my efforts (and those of others) over the past two decades are beginning to bear fruit.

Largely because of my national renown in this area, the development office at Chapman University applied for and obtained a major grant that would support our work. Included in that grant were funds for hosting a conference that would address the issues from a wide range of ideological perspectives. Professor Caso and I offered to coordinate with the Chapman Law Review to have that conference be co-conducted as the annual Law Review Symposium. Most of the participants in that symposium, which due to COVID restrictions is being held via Zoom over three consecutive Fridays, agreed to participate in response to my personal invitation, and the three most prominent—D.C. Circuit Judge Neomi Rao, retired D.C. Circuit Judge and former California Supreme Court Justice Janice Rogers Brown, and Richard Epstein, one of the most prominent legal scholars in the nation—only did so because of close personal relationships with me. I was due to speak at today’s panel on the non-delegation doctrine.

But this week, University Counsel Janine DuMontelle prohibited me from speaking at the conference I was instrumental in organizing. She claims—falsely, in my view—that my mere appearance as a (now) outside speaker would suggest that I have a current and ongoing affiliation with Chapman, which because of my recent retirement I no longer have. This is utter nonsense, and I sincerely doubt that any of the other outside invited speakers would view their participation as implying any formal affiliation with Chapman University. More to the point, the university has parleyed my renown on the subject to obtain both funds and speakers, then barred my participation.

Some have speculated that I withdrew from the conference of my own accord. That is false. I have been prohibited from participating by the university, in what is the latest manifestation of its capitulation to “cancel culture.” The university has done a disservice not only to me, but to the students on the Chapman Law Review who have worked so hard to bring to fruition what was an ideologically balanced conference on an important and current topic of constitutional law. Those students deserved better, as did I.

Conservative lawyer John Eastman spoke at an online student event on Monday hosted by the ASU Federalist Society, despite calls from students and the dean of Sandra Day O’Connor College of Law urging the event be canceled. 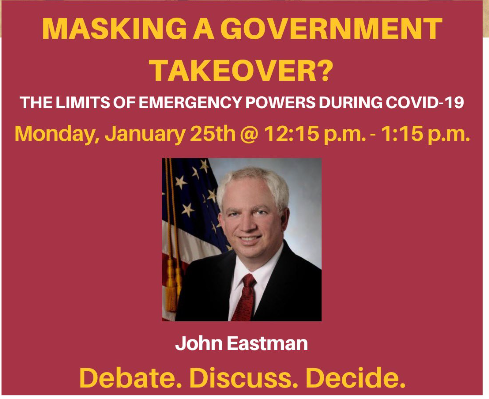 Dear ASU Law Community:
Tomorrow, the ASU Law chapter of the Federalist Society with be hosting a virtual event featuring John Eastman as a speaker. While we respect our students’ First Amendment right to host events like this, we believe Mr. Eastman is beneath the standards of ASU Law. We condemn his involvement in the recent events at the Capitol and his inflammatory statements about the presidential election.

While ASU permits registered student organizations to host guest speakers and use university facilities for student events, we want to be clear that ASU does not endorse the views of any invited speaker. It is important to emphasize again, the university does not have any legal recourse or option to cancel these types of events. Every faculty member who was approached to be part of this discussion has voluntarily withdrawn their participation. In addition, all faculty including faculty advisors have urged the students to reschedule or postpone this event.

Despite all of these discussions, the students have made their own independent decision to move forward. I respect the right, although vehemently disagree with the judgement, of our students to move forward with this event. They made the invitation long ago—and they wish to “honor” that invitation. What is important to note is that one person does have the power to stop this event from happening and that is Mr. Eastman himself. No faculty member will appear with him yet he is insisting the event should proceed. As of this writing, he has selfishly chosen not to cancel. I urge Mr. Eastman to do the right thing and give our students the opportunity to reschedule this event.

While we at ASU Law cannot cancel the event, members of our community may, of course, exercise their right to voice disapproval of Mr. Eastman’s involvement and not attend tomorrow’s event.