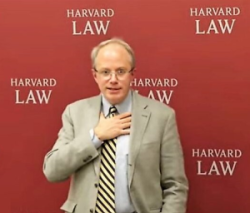 Addressed to five Law School deans, the statement — signed by organizations including the Harvard Parity Project, the Equal Democracy Project, and the Black Law Students Association, among others — describes Vermeule’s digital rhetoric as “harmful to democracy” and “unbelievably divisive,” with a particular emphasis on his recent allegations of election fraud. ...

Nicole M. Rubin, who co-wrote the statement, said she felt motivated to take action after realizing several students felt uncomfortable with what Vermeule posted online. She said many students documented Vermeule’s rhetoric by taking screenshots of his tweets.

We ask that Harvard Law School take the following steps: