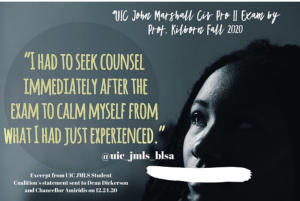 IMPORTANT UPDATE BELOW: PROFESSOR KILBORN WAS NOT SUSPENDED BECAUSE OF THE EXAM QUESTION

Last month, we noted UIC John Marshall Dean Darby Dickerson's suggestion "that law schools should be 'transformed' into 'anti-racist institutions' [as distinct from being non-racist ones that comply with equal opportunity laws]," observing that it "would portend a massive violation of the academic freedom of all faculty (for example)."   Alas, this proved more prophetic than we realized.

The question at-issue contained a racial pejorative summarized as follows: “‘n____’and ‘b____’ (profane expressions for African Americans and women).” The fact pattern involved an employment discrimination case where the call of the question was whether or not the information found was work product.

Just to be clear:   the exam neither used nor mentioned the actual offending words, just the first letters of those words followed by the underline, as quoted above.  Professor Kilborn has actually used variations on this hypothetical, with the n- and b-words (as above), for a decade without any incident! ...

I’ve just learned my suspension has been a huge failure of communication from the university to me.  While the battle over the exam language continues, it turns out I was actively misled into believing my suspension was related to that language.

On Thursday, January 7, I voluntarily agreed to talk to one of the Black Law Students Association members who had advanced this petition against me.  Around hour 1 or 1.5 of a 4-hour Zoom call that I endured from 5:00 pm to 9:00 pm with this young man, he asked me to speculate as to why the dean had not sent me BLSA’s attack letter, and I flippantly responded, “I suspect she’s afraid if I saw the horrible things said about me in that letter I would become homicidal.”  Conversation continued without a hitch for 2.5 or 3 more hours, and we concluded amicably with a promise to talk more later.

He apparently turned around and reported that I was a homicidal threat.  Our university’s Behavioral Threat Assessment Team convened, with no evidence of who I am at all, and recommended to my dean that I be placed on administrative leave and barred from campus.

Kathryn Rubino (Above the Law), Law School N-Word Controversy Is More Complicated Than It Appears At First Glance:

The law school provided this statement about the incident:

The Law School recognizes the impact of this issue. Before winter break, Dean Dickerson apologized to the students who expressed hurt and distress over the examination question. The Law School acknowledges that the racial and gender references on the examination were deeply offensive. Faculty should avoid language that could cause hurt and distress to students. Those with tenure and academic freedom should always remember their position of power in our system of legal education.

The Law School is working with UIC’s Office for Access and Equity to conduct a thorough review of this matter, and Dean Dickerson and other Law School and University leaders have scheduled a meeting with student leaders. We remain committed to ensuring that all of our students have a safe and supportive environment and that all members of the Law School community live up to our shared values. ...

Kilborn told Above the Law:

I am fully prepared to accept responsibility for using a context and first-letter abbreviated reference that caused anyone to feel distressed—I absolutely did not and do not want this, I’ve expressed regret for it, and I’ve learned something valuable here. But the right way for BLSA and others to react here is anything other than what they’ve done, and I hope you don’t further this unnecessary, unwarranted, and unconstructive attack on me. If someone inadvertently bumps into you on the street and says “hey, sorry about that” quickly, I hope none of us believes the appropriate response is to pounce on that person, beat them mercilessly, and disseminate all manner of invective about them to their employer and all over the internet. BLSA has actively pursued a campaign against me by contacting (1) central UIC administration, (2) my dean, (3) Instagram, (4) LinkedIn, (5) Channel 2 news, and perhaps to other news outlets, too, and (6) formally filing a complaint with the Office of Access and Equity. This is the office at UIC that deals with instances of alleged discrimination and harassment. When my dean mentioned to me that there was some issue with my question, I suggested the notion of my expressing regret for distressing anyone, and the dean put me in touch with the OAE for their view. A representative from that office was provided the question and the context, and we had a Zoom call that very evening, in which the rep assured me I had done nothing at all wrong, but she supported my idea to express regret if I my re-use of that question made anyone feel uncomfortable. I did that, and here we still are …

I love my students—EACH AND EVERY ONE of them, and I’ve gone out of my way to be supportive of the careers of women of color and others. I’ve done my best to use the same first-letter reference to that word that I see all over the internet, including in the commentary of people explaining that it is entirely inappropriate to use the word—and they reference it as “the n-word”—again, which is exactly what I did. For me to be cast as some sort of insensitive bigot because I used the very same first-letter reference to a horrible word that Civil Procedure is designed to root out and address is … a disservice to the role that law plays in our troubled society and the role that we lawyers have to play in rooting it out and eradicating it.

Eugene Volokh (UCLA), "The Law School Acknowledges That the Racial and Gender References on the Examination Were Deeply Offensive":

Here's the text of an exam question (worth 1 point out of 50) administered in Prof. Jason Kilborn's civil procedure class at University of Illinois Chicago John Marshall Law School:

After she was fired from her job, Plaintiff sued Employer under federal civil rights law, claiming employment discrimination on the basis of her race and gender. [discussion of other evidence omitted]  Employer also revealed that one of Plaintiff's former managers might have damaging information about the case, but no one at Employer knew where that former manager was, since she had abruptly quit her job at Employer several months ago and had not been heard from since.  With nothing to go on but the manager's name, Employer's lawyer pieced together several scraps of information and concluded that this former manager must be located in a remote area of northern Wisconsin.  Employer's lawyer spent $25,000 to hire a private investigator, who successfully located the former manager in northern Wisconsin.  Employer's lawyer traveled to meet the manager, who stated that she quit her job at Employer after she attended a meeting in which other managers expressed their anger at Plaintiff, calling her a "n____" and "b____" (profane expressions for African Americans and women) and vowed to get rid of her.

Later, Plaintiff's lawyer served [another discovery demand, omitted, and] an interrogatory demanding the identity and location of any person with any information related to the termination of Plaintiff's employment at Employer or potential discrimination against Plaintiff by Employer or any agent of Employer.

Can Employer identify the former manager but properly withhold her location, as this is the product of a significant amount of work and expense by Employer's attorney?

As readers of this blog doubtless gathered, the "n____" and "b____" were what was written on the exam; as usual, I don't expurgate such words in quotes—the professor had expurgated them himself on the exam. ...

What exactly will the rule be when teachers want to talk about racial or sexual harassment, or other mistreatment of people based on race, sex, religion, sexual orientation, and the like? Have we reached a point that one can't even quote epithets in expurgated form? Or is it that all discussion of "deeply offensive" conduct by defendants is itself "deeply offensive," regardless of the words (or letters and underlines) that one uses? ...

How can academic freedom and institutional self-government work if these decisions are made and publicly announced by deans, apparently without any real discussion with the faculty as a whole?

As readers of the blog know, Prof. Randy Kennedy and I have a forthcoming article (Quoting Epithets in the Classroom and Beyond) that argues that it is quite proper for professors to accurately quote epithets, without expurgation, though we don't discuss the specific context of exam questions. But this incident seems to show that the movement to restrict speech in law schools have slipped far beyond that particular controversy.

Please note that I have never met Jason in-person. I know of him from posts to the Civ Pro profs listserv, where he has discussed infusing anti-racism and racial-justice issues into the Civ Pro curriculum. So this is not defending a friend. But I am genuinely curious as to what was wrong with the question. What are the rules, so professors can avoid creating "momentous distraction and cause[ing] unnecessary distress and anxiety" or demonstrating "lack of respect, decency, and civility?" ...

[Reader comment]  Context matters. It’s one thing to have an entire conversation about race and the law, where the topic is discussed with sensitivity and nuance, and students know what’s coming in advance. It’s quite another to throw a racially charged fact pattern that isn’t necessary to the question itself to unsuspecting students. That sets up a whole new risk of discrimination, whereby students of color are more affected by the language of the question than white students are, and consequently, do worse. To those who would rebut that we face such situations as lawyers: well, yes, but we generally have more time to process our reactions to those situations than a timed law exam allows. ...

[Reader comment]  I’m not black, so I can’t experience firsthand what it’s like for someone who is to encounter that word on the street, let alone in the high-stakes high-stress context of a civ pro exam. But it’s not hard to believe that it must be incredibly upsetting and agonizing even in the former situation, to say nothing of the latter.

Why ATL seems to be going easier here is a question for them I guess, but there are some possible explanations I think. It’s pretty clear he wasn’t doing it for deliberate empty shock value like the smug edgelords (Volokh et al.). I’d say he was more of the clueless variety. And he did offer an apology of sorts. But, from the portions quoted by ATL, it came across more like a non-apology “I regret if anyone was offended” type deal. The rest of the excerpt just seemed to be him making excuses (he has to use it to illustrate employment discrimination), minimizing it (it wasn’t any worse than a mere pedestrian fender bender), justifying it (he’s actually helping fight discrimination by drawing attention to it), impugning the methods and motives of those who complained—and thereby sort of negating the initial halfhearted apology (BLSA didn’t react “the right way” [LOL!]), denying that he was even wrong anyway—so yet even more apology negating (the OAE rep said he was blameless), and finally engaging in some rhetorical excess (“a disservice to the role that law plays in our troubled society ...”).

So I get that he was clueless, but it’s not really an excuse. He should have just come clean and owned what he did more decisively. The thing about using the same exam question for a decade doesn’t help him either. It seems to me he just got lucky that nobody in past years had the same kind of reaction, or did, but didn’t feel courageous and/or empowered enough to speak up.