WSJ: Hit By Covid-19, Colleges Do The Unthinkable And Cut Tenure

Wall Street Journal, Hit by Covid-19, Colleges Do the Unthinkable and Cut Tenure: 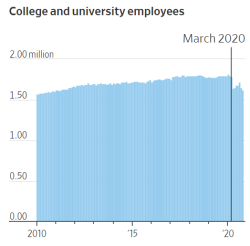 When Kenneth Macur became president at Medaille College in 2015, the small, private school in Buffalo, N.Y., was “surviving paycheck to paycheck,” he said. Enrollment was declining and the small endowment was flat.

Then came the coronavirus pandemic. The campus shut down and revenue plummeted 15%. Dr. Macur saw what he considered an opportunity: With the approval of the board of trustees, he suspended the faculty handbook by invoking an “act of God” clause embedded in it. He laid off several professors, cut the homeland security and health information management programs, rescinded the lifelong job security of tenure and rewrote the faculty handbook, rules that had governed the school for decades.

“I believe that this is an opportunity to do more than just tinker around the edges. We need to be bold and decisive,” he wrote in a letter to faculty on April 15. “A new model is the future of higher education.”

Dr. Macur and presidents of struggling colleges around the country are reacting to the pandemic by unilaterally cutting programs, firing professors and gutting tenure, all once-unthinkable changes. Schools employed about 150,000 fewer workers in September than they did a year earlier, before the pandemic, according to the Labor Department. That is a decline of nearly 10%. Along the way, they are changing the centuries-old higher education power structure.

The changes upset the “shared governance” model for running universities that has roots in Medieval Europe. It holds that a board of trustees has final say on how a school is run but largely delegates academic issues to administrators and faculty who share power.

This setup, and the job protection of tenure, promote a need for consensus and deliberation that is one reason why universities often endure for centuries. But this power structure can also hamper an institution’s ability to make tough personnel decisions or react quickly to changes in the labor market or economy.

In recent months, the American Association of University Professors, which advocates for faculty and helped establish the modern concept of tenure in 1940, has received about 100 complaints from professors around the country alleging power grabs by college presidents. The organization has labeled the changes at colleges a “national crisis.”

No sympathy for tenure. A lifetime guarentee is BS and helps explain the lack of real education in higher education. Too many administrators also hurts the cause. At best contracts, not tenure