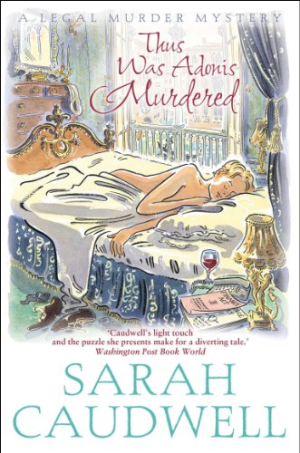 When her personal copy of the current Finance Act is found a few metres away from a body, young barrister Julia Larwood finds herself caught up in a complex fight against the Inland Revenue.

Set to have a vacation away from her home life and the tax man, Julia takes a trip with her art-loving boyfriend. However, all is not what it seems. Could he in fact be an employee of the establishment she has been trying to escape from? And how did her romantic luxurious holiday end in murder?

It would be a conventional murder mystery, in the classic mid-century English style (although published in 1981), except that (1) it's hilarious — both the narrative voice and the dialogue seem to have stepped out of the pages of Oscar Wilde, and (2) it features a group of English barristers, prominently including a tax lawyer who is getting audited because she didn't file for some years and now feels that Inland Revenue is unfairly harassing her, and who is always giving advice such as: find excuses to deduct your holiday trips as business, or marry a poor person if you're rich to take maximum advantage of income-splitting rules. She also gets arrested for murder because the police find her inscribed copy of the Finance Act at the scene of the crime (while she is on vacation). — Dan Shaviro (NYU)