The Changing Landscape Of Legal Education: A 15-Year LSSSE Retrospective

Law School Survey of Student Engagement, New Research Provides Insight into Trends in Legal Education over the Past 15 Years: 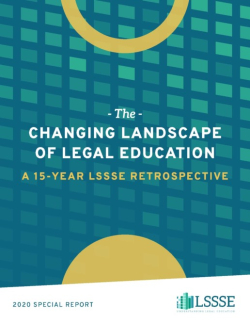 Newly-released data by the Law School Survey of Student Engagement (LSSSE) provides a compelling look at changes and trends in legal education from 2004 to 2019. Data from this Report, The Changing Landscape of Legal Education: A 15-Year LSSSE Retrospective, draw from the responses of 72,692 law students at 248 law schools that participated in LSSSE in four survey years: 2004, 2009, 2014, and 2019.

“It is an honor to share this longitudinal analysis of LSSSE data, highlighting fifteen years of partnerships with law schools focused on improving legal education,” said Meera E. Deo, Director of LSSSE. “To that end, we see consistent employment expectations, increases in student learning outcomes, and high levels of overall satisfaction with the law school experience. While there is still work ahead, especially with regard to debt, I am confident that LSSSE will continue to help schools reach their goals.”