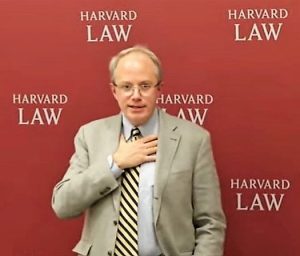 This story of cancel culture would be laughable were it not for the fact that it is so serious. It involves an attempt by four Harvard Law School student groups to interfere in the employment of, and damage the career of, Professor Adrian Vermeule. ...

It’s not easy to pigeonhole Prof. Vermeule in the current political context. I’d classify him, based on what I’ve read, as a political and intellectual iconoclast. A lot of people would probably call him a conservative, though I don’t know if that’s what he’d call himself. ... I follow Prof. Vermeule on Twitter, where his account is entertaining, irreverent, and sarcastic. ...

[F]aux outrage, inability to detect sarcasm, and ability to turn standard Twitter fare into outrage !!! has led to a much more serious attack on Prof. Vermeule in a letter sent to HLS administrators demanding punitive actions (more below), as reported by Chrissy Clark at The Washington Free Beacon:

It was authored by People’s Parity Project, a group of law students and new attorneys who aim to “unf*ck the law” by ending “how the legal profession—and the law itself—enables harassment, discrimination, and other injustices.” …

I obtained a copy of the letter. It is issued on behalf of four student groups:

The letter is three-pages single spaced, with an additional 42 pages of screenshots of tweets and excerpts from articles. It’s clear from the letter that someone or some group spent a lot of time trying to build a case against Prof. Vermeule, scouring his record to present a twisted version of reality. Prof. Vermeule was targeted, this didn’t just happen. ...

While they don’t call for Prof. Vermeule to be fired, they want him publicly shamed by the law school and humiliated by stripping him of key teaching assignments, including banning him from teaching first year law students:

We ask that Harvard Law School take the following steps:

1. Release a statement condemning Prof. Vermeule’s spread of inaccurate conspiracy theories about the election, violent rhetoric, and intolerant statements.
2. Conduct an investigation into whether Prof. Vermeule is spreading misinformation or discriminatory content in his classes or discriminating against students on the basis of characteristics protected by HLS’s Policy Against Discrimination, and take appropriate action until the investigation is completed.
3. Create at least two sections of Administrative Law per semester, so that no student is forced to take a class with Prof. Vermeule.
4. Commit that going forward, Prof. Vermeule will not teach 1Ls.

We are at a very dangerous place. The push to homogenize the intellectual life at our top universities is being driven by intolerant students and student groups who are so self-absorbed they think nothing of destroying careers to satisfy their own political and personal agenda.

Agree a very dangerous place. The first thing is for rational people to stop giving any institution undeserved credit for anything. As far as quality, it is not coming from Harvard. Governments, state and federal are inundated with graduates, anything going well? Can you show a real accomplishment from there or other ivy league school that makes them better than Whats A Matter U?
No you can't. Stop buying into hype and spank the kids

It’s the students who deserve to be shamed