Fifty Years Of Tax Cuts For The Rich Didn’t Trickle Down, Study Says

This paper uses data from 18 OECD countries over the last five decades to estimate the causal effect of major tax cuts for the rich on income inequality, economic growth, and unemployment. First, we use a new encompassing measure of taxes on the rich to identify instances of major reductions in tax progressivity. Then, we look at the causal effect of these episodes on economic outcomes by applying a nonparametric generalization of the difference-in-differences indicator that implements Mahalanobis matching in panel data analysis. We find that major reforms reducing taxes on the rich lead to higher income inequality as measured by the top 1% share of pre-tax national income. The effect remains stable in the medium term. In contrast, such reforms do not have any significant effect on economic growth and unemployment. 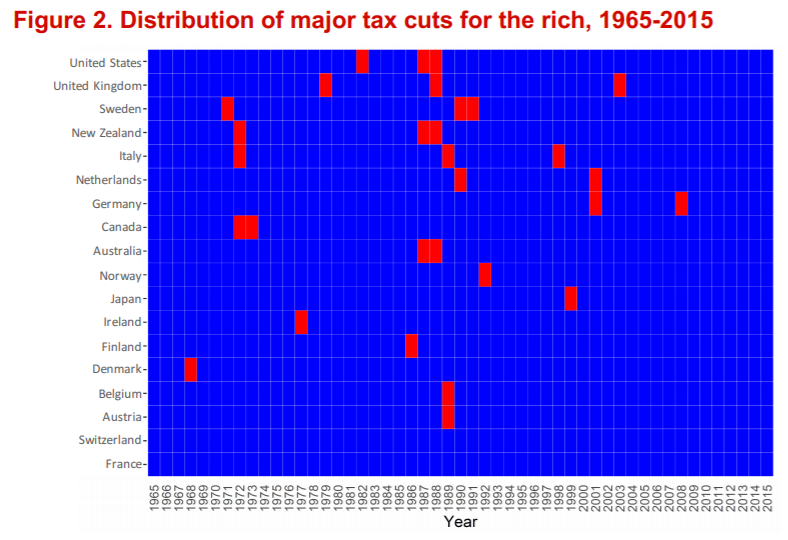 "In contrast, such reforms do not have any significant effect on economic growth and unemployment."

True, but it's interesting to note that the article does not say whether that insignificant effect was positive or negative. Tax reductions on the rich, and the upper middle class by the way, do tend to happen at the same time as economic booms. Cases in point: the early 1960s, the 1980s, and just recently, pre-COVID. And contrary to popular belief, the early 1960s tax reductions supported by JFK and signed into law by LBJ actually made the federal system more progressive.

It's also worth pointing out that tax increases on the rich also don't significantly affect economic growth and unemployment.