This blog posting focuses on the 193 fully-accredited ABA law schools outside of Puerto Rico that had first-year attrition data for all three academic years.

The more dramatic decrease in attrition in the 2019-20 academic year may partly be attributable to the stronger entering class profile, but it would seem likely that the Covid-19 pandemic played a significant role as well.  As a number of law schools shifted to pass-fail grading, the existing policies for dismissal based on GPA became less functional, so a number of law schools that shifted to pass-fail grading may have made a determinations not to dismiss students for academic under-performance under their existing GPA-based policies, at least not at the end of the first-year.  (While I have not tracked upper-level attrition, it would be interesting next year to see if there is a corresponding increase in academic attrition of second-year students.)

Perhaps unexpectedly, particularly in the midst of the pandemic, other attrition also declined significantly.  One might have anticipated that the added stresses associated with the shift to an online learning format and the realities of social distancing and increased social isolation might have nudged a larger number/percentage of students to consider dropping out of law school.  Indeed, one might have expected that with less academic attrition, some at risk students might have opted out of law school (and been categorized as other attrition).  But these data indicate that, in fact, fewer students decided to withdraw from law school in 2019-20 than in the prior two years.

Notably, there are different rates of attrition across law schools in different LSAT categories. The following chart breaks down attrition by groups of law schools based on median LSAT for the law school for the entering class each year from 2017-18 to 2018-19 to 2019-20.  For each year, the chart shows the average first-year attrition rates for law schools with a median LSAT of 160 or higher, of 155-159, of 150-154 and less than 150. In addition, it breaks out “academic attrition” and “other attrition” as separate categories for each category of law school for each year, and then provides the overall average academic attrition, other attrition, and total attrition rate each year.

When looking at this data, some things are worth noting.

While it may make sense that “academic attrition” increases as law school median LSAT decreases, when one looks at the data within each LSAT category, there is a surprising range of academic attrition rates across law schools, with variability increasing significantly as median LSAT scores decrease.  There was much less variability with respect to “other attrition.”  Chart 1 provides a pictorial representation of the data described below for the 2018-19 academic year.  (I have not run this analysis yet for 2019-20, but this chart looks very similar to the chart covering 2015-16 in the January 2018 blog post.) 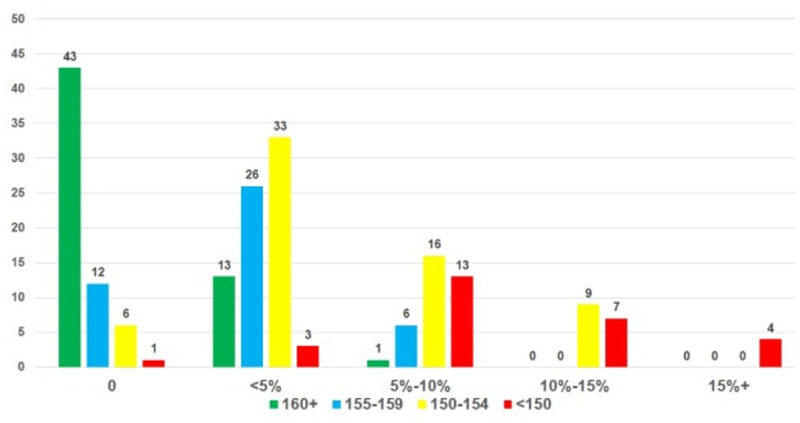 This phenomenon of much greater variability in attrition rates among law schools with a median LSAT of less than 155 may merit further attention.  For law schools with a similar 50th percentile LSAT and 25th percentile LSAT for their entering classes, what can explain a range of academic attrition from 1% or 2% to more than 15% or 20%?  Does one school have a much higher standard for academic good standing and dismissal?  Does one school have a much more robust academic support program?

Early in 2017, the Council for the Section of Legal Education and Admissions to the Bar approved a change to Standard 501, dealing with Admissions.  Interpretation 501-3 reads as follows: “A law school having a cumulative non-transfer attrition rate above 20 percent for a class creates a rebuttable presumption that the law school is not in compliance with the Standard.”  This presented an issue for six law schools in 2018-19, each of which had a non-transfer attrition rate of more than 20%.

There would appear to be a few possible explanations for this disproportionate rate of academic dismissal among students of color.

Second, it is possible that students of color experience less sense of “belonging” in law school, particularly if they are first-generation students or students from a lower socioeconomic community, without a social support network connected to the legal profession.  This also may make it more challenging for these students to find success and to perform to their abilities in law school.

There likely are other factors that also contribute to this disproportionate experience of academic attrition among students of color.  This would merit greater research attention.

To the extent that law schools want to diversify their student bodies in an effort to foster greater diversity in the profession, law schools need to find ways to help students of color find more success in law school so that academic attrition does not disproportionately affect students of color.

(I am grateful to Tiffane Cochran and Scott Norberg for helpful insights and comments on earlier drafts of this blog.)