According to Federal Elections Committee filings data analyzed by the News, 611 current Yale professors and lecturers have donated $200 or more — the minimum donation amount that is publicly disclosed — to individual political groups and campaigns over the past seven years while employed by the University. Of these donors, less than 3 percent donated to Republican-affiliated candidates and groups. 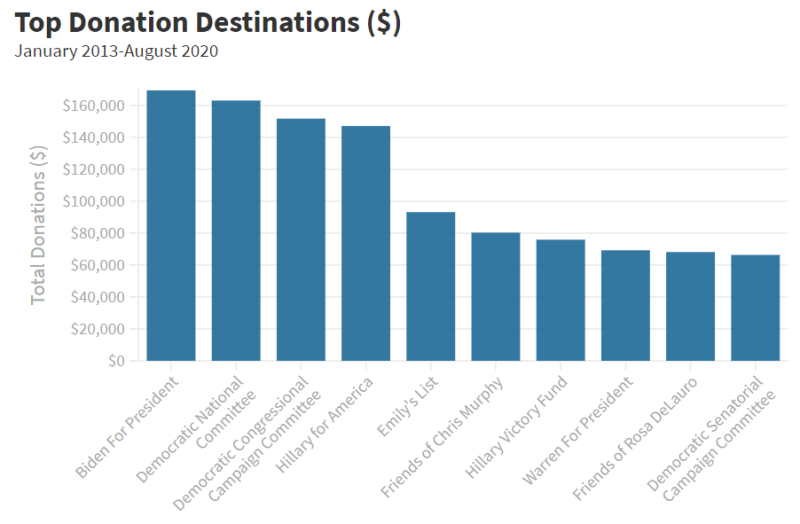 Of all University departments, academic faculty at the Yale Law School had both the highest number of donors — 51 — and the highest dollar amount of donations: $329,154. ...

T. Lawrason Riggs Professor of History and Professor of Religious Studies Carlos Eire told the News that he was surprised that there were Republican-affiliated donations at Yale, an institution he considers to be a “giant liberal echo chamber.” He expected there to be none. “There is no genuine diversity in higher education when it comes to political leanings, and no genuine inclusion,” Eire said.

David Gelernter, professor of computer science, agreed. In an email to the News, he wrote that to him, the data suggests that Yale faculty as a whole are both “closed-minded” and “incurious,” which he claims is a widespread issue across academia.

1. Stop subsidizing these people.
2, Stop using these institutions to sort the labor market.

Given that the major rankings are purposefully designed to reward schools like Yale and Harvard for being Yale and Harvard, I wouldn't be too worried about it. US News et al will not allow Yale and its ilk to be outranked. In fact, the one time they tweaked their methodology and Caltech popped up at #1, they apologized, went back to their old ways, and never allowed Caltech to appear higher than #5 or so ever again.

The point is the rankings are not just bunk, but possibly the clearest examples of Goodhart's Law on Earth.

Perhaps this is why Yale, formerly the top rate university, is now something like #5?

What this data shows has nothing to do with lack of curiosity or closemindedness. It has to do with people who are trained as critical thinkers, cognizant of the importance of evidence-based analysis, and able to discern charlatans who espouse 'alternative facts' to benefit their own agendas.

Mmm hmm. According to the university's website, Yale has 4,869 professors (a number that may not even include lecturers), so another way of phrasing that headline is that only 12% of Yale faculty made political contributions over $200 at all. But that wouldn't generate frothing cultural anger and malice, so...