The Effect Of The TCJA On Big Tech

U.S. tech companies heavily laden with intellectual property have long taken advantage of opportunities to engage in cross-border tax planning. This is evidenced most plainly by their low effective tax rates and the large proportion of their profits outside the United States. The tax community understandably has been preoccupied with the new and complex international tax provisions that were supposed to put a damper on all that. But central to understanding the Tax Cuts and Jobs Act’s effect on tech companies is its 14 percentage point cut in the corporate tax rate.

Data presented here show that large U.S. tech companies generally have improved their tax position since passage of the reform. But in what is turning out to be a major reversal of fortune, many of those that were most aggressive previously at shifting profits have gained the least from the TCJA.

Company responses have varied. Early indications are that generally, profit shifting out of the United States has halted and even reversed. Figure 1 shows that the average foreign share of non-U.S. profits dropped from 66 percent in the three-year period from 2015 to 2017 to 61.2 percent during 2018 and 2019. 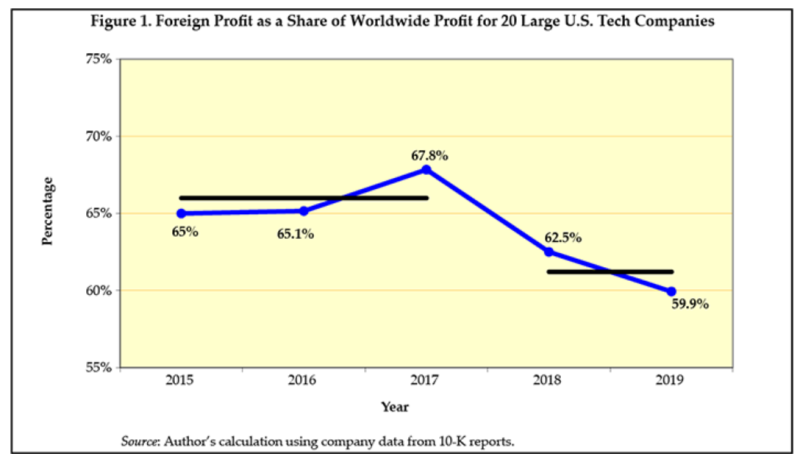 That suggests that the compression of the differentials between U.S. and foreign corporate taxes — attributable to the reduction of the U.S. rate from 35 percent to 21 percent; the extra tax burden on (foreign) global intangible low-taxed income; and the new relief for (domestic) foreign-derived intangible income — may be having the expected effect on where companies locate their profits. But, as should be expected when so much depends on individual company facts and circumstances, some taxpayers have enhanced the benefits from the corporate rate cut by increasing their share of foreign profits outside the United States.