With the result of the presidential election between President Donald Trump and Democratic Joe Biden nominee still not final, University of Miami School of Law professor Daniel Ravicher began tweeting his views on Twitter in support of Trump, which included accusing the Democrats of cheating by deliberately stopping votes. 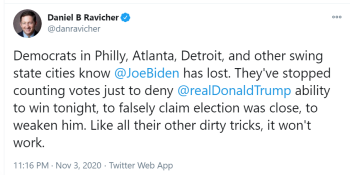 Ravicher also expressed his opinion about cheating in the American election process. ... On Wednesday, Ravicher also discussed racial minorities and their party alignment. ...

As these tweets began to spread amongst undergraduate and law students, one Black undergraduate student who was considering remaining at UM for law school said that now it is completely out of the picture.

“Never did I ever imagine such disgusting rhetoric would come from a professor at UM Law,” said junior Charis Pitter, who hopes to serve as a lawyer for marginalized communities. “As a UM student, I’m disappointed, angry, but not surprised because the way the UM administration has handled hate speech during this election season shows their true colors. I came here because UM always preached diversity and acceptance, but I no longer feel like I’m at an institution that values me.” ...

Ravicher tweeted he will not resign from his position at UM Law. However, he said since he believes he will soon be out of a job, he will join President Trump’s legal team to fight his case in the Supreme Court regarding this presidential election.

BB: The Supreme Court ordered Pennslyvania officials to segregate ballots coming in after election day, but they're still be counted and tallied and added to Biden's lead. Politico reported that just the other day.

The reason to be troubled by these Twitter posts is not that they represent a conservative or Republican view. Rather, it is that they support an absurd and totally unsubstantiated theory that somehow the vote count in multiple states is fraudulent. Any member of a bar, including and especially a law professor, should reject outlandish conspiracy theories and the like, as they have no basis in fact. Furthermore, there is no justiciable issue at hand for the Supreme Court to even accept a case. The only plausible one would be the issue in PA of ballots received after Election Day. Those represent an extremely small number of ballots that have not even been added to Biden's already substantial lead and that have been segregated by order of the PA Secretary of State. There is no meaningful relief for Trump on that issue, as he loses based on ballots received by Election Day.

They can transfer to Rutgers

Trump won Florida. Are leftists going to start punishing people who support the candidate who won the state? I makes sense that would happen in blue states, I have personal experience there.

I would literally sue every last person. Various avenues like interfering with a business relationship. I’d literally do that nonstop.